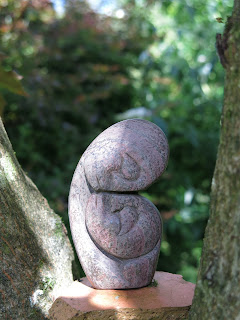 It's rare that I post 2 letters to you on one weekend,
but having heard a piece of music entitled 'The Lonely Particle' on Radio 3 yesterday morning - it hit a spot within me which produced a series of thoughts - stream of consciousness if you like. I share this not because it is a great or clever piece of writing but because it is the only way I know how to  release it from within.

We are all built of particles, elements, salts, fluids.
Within this mysterious biology is a lonely particle on its journey through time and space.
Deep within us it seeks to be connected to something that shines
That is not dulled by other elements
Or faded
Or broken.

How can this particle find its home
Its rest
Its target
Its completeness, in a world of forced separation and violent disintegration perpetrated by human against human
Blood for blood
Bone for bone ?

Though remote from the horror they sit in fortresses and palaces
Foreign or familiar.

Oh where does this end ?

Look to the end of violence in the violence perpetrated by men against a man because of the light contained within him.
The lonely particle finds its home there.

Have no time for organisations
For man-made systems of control.
Have no time for hierarchy
For those that Lord it over you - who find your place for you and keep you there.

Have no time for fragmentation or disintegration
Find the light and stay in it
Shelter in it
Be held in it
No harm is there
No brutality
No hate
Not even my hatred
No partiality
Not even my partiality
No judgement
No, not even mine.

Today I read how Helen MacDonald described her encounter with a goshawk in an article in the Guardian - 'seeing the goshawk .....was the start of my education, the start of understanding the difference between knowing something and feeling it deep in your bones.'

For me that describes the journey of the lonely particle, sometimes it bumps into the light.