Do you really want to see my chillies ?


I often wonder whether any of you really want to look at pictures of my garden, there is an over saturation of pictures on the Internet. I suppose we post them because we are excited and enthused by the act of making gardens and watching things grow. I have no expertise and claim no authority whatsoever and am a bit befuddled now by so much that is currently on social media.

Is a garden a garden because it is deemed so by an 'expert' ? I had this conversation with my walking buddy Charles Hawes. Much like art or poetry or music - what is deemed great or good is very much in the eye and knowledge base of the beholder. Then there is the question of critique as posed by Anne Wareham on thinkingardens.co.uk . I tend to be very uncritical of the garden world and accept a variety of styles and levels of knowledge but I admit that I do have preferences, I like gardens with a story and a strong element of placing and design, but like anyone I fear criticism. I have written on this subject before. There can be constructive or destructive criticism, it depends on what we are looking to achieve with our creations. If we are trying to achieve high art then perhaps we need to understand the formula /rules and how to apply them and accept that we will be judged according to them - that's what makes academia work. However, I do think that following the rules sometimes squashes creativity. It may be an unresolvable argument!

Meanwhile here in my little garden I find it so humbling just to see bullfinches using the wire trellis as a perch. Such beautiful birds - the male with his unabashed pink breast and the female ashen brown, both with black caps and white flashes on their tails, both plumply rounded and always together. 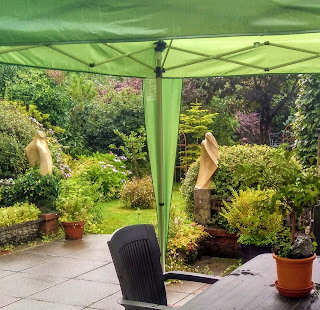 Today the garden looks French  - I'm not sure why, perhaps it's the presence of the sculpted figures by Rebecca Buck and the symmetry that I've been aiming for. I often wonder what readers of this rambling blog actually think of it - it's not trying to be anything other than what it is. 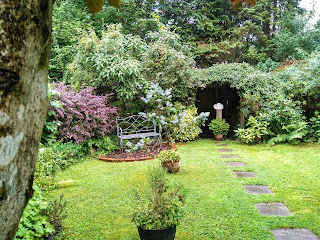 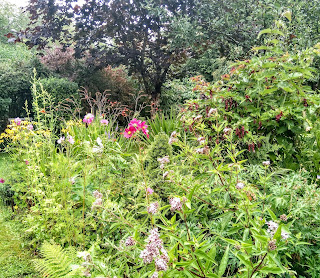 I have been pleasantly surprised by its mature feel this year - it has taken a while and not a lot of money but it makes me feel rich - rich in the sense of peace it gives me . 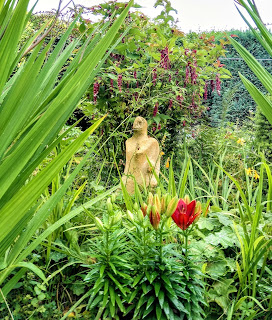