I have actually had a day in the garden. New soil in the planters, weevil grubs squashed, and worms fed to the chickens.

I love my garden (sometimes). I love being in it - planning in it in a random way - much like the way I develop a painting or drawing. It sort of grows from ideas - it has a sort of starting point, but it is not a design, it is not Alan Titchmarsh, all groomed and smooth with tidy borders - it's more fluid than that - so I'm not sure it can be called a garden. But of course that is nonsense, any plot of ground can be called a garden by its inhabitants - even if it has no design.

This love I have comes from my dad who has always grown things. He had a plot where he grew vegetables in lines and built his own lean-to greenhouse out of old window frames. We had views from it looking out over Swansea Bay from the docks to Mumbles. I used to 'help' plant the broad bean seeds and the runner beans, and burn things on a bonfire in an old tin bin....oh what joy !
I also made caterpillars out of plasticine that were so convincing that 'uncle' Alan who shared the plot was seen flicking them off the cabbages where I had placed them and cutting them in half with his knife ! This was one of the most successful art 'happenings' of my artistic career.

I was fascinated by insects and wildlife. I remember being enthralled by a pair of mating garden tiger moths, joined at the end of the abdomen...but dad obviously thought it too soon to give me the facts so said they were twins!

I still love to paint and draw insects and wildlife, but am keenly aware that they are not as abundant as when I was a child.

Good to talk to you again Monty. 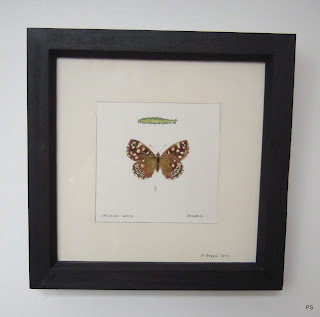