23/3/12 - I have written that date at least 25 times today.... or so it feels after sticking needles into babies and making them cry. I cannot believe that I have been a nurse for 25 years and that I now deal with all the things that made me a slave to fear as a child, illness, disease and death. I used to pray to an unknown God to stop the rot. I remember praying for friends, family, pets, soft toys and the assorted rescued animals found in the garden.

I remember Star, the injured starling all speckled greens purples and gold, we fed him on worms, but he died after dad decided to wash him. (you were only doing what you thought best dad!). There was Speedy the tortoise who died in his cardboard box during hibernation.

The thing that took my fear to a new and awful level was the sudden death of my grandfather, or Bampa as we called him. He was such a lovely man, our cat loved him, she used to curl up on his ample belly and purr like mad. One dreadful hot summer day after what was a happy trip to Swansea Bay, we came home to be told that Bampa was gone. I cried out to God - the unknown God, and thought it was some sort of punishment.

I became terrified that others would die, I became obsessed to the point of condensing prayers to squeaks and performing little private rituals to placate this god. No matter how much I worried, prayed and squeaked I couldn't control the uncontrollable.

And so it remains.

Today I listen to people tell their stories of approaching death. There are those who have lost their partners who feel so lost and lonely, they see no point to life. There are those who resent the fact that they are getting old with all the attendant health problems, and would do anything to prevent the inevitable. But there are those who just accept what is before them with dignity and grace. So many different stories.

We cannot control the uncontrollable, but we continue to fight it, to grapple with it. Those who seem happiest to me are those that accept where they are, that is such a beautiful but difficult thing to do in this age. This age is one of high expectations, and I still have them myself. I still want to be more alive, I want to live the creative life, to break free of the daily grind.....so I pray to the known God knowing deep down that this is the wrong request. The answer is to be content at all times, and not to covet anything too much, not even life itself.

See you in the eternal garden Monty. 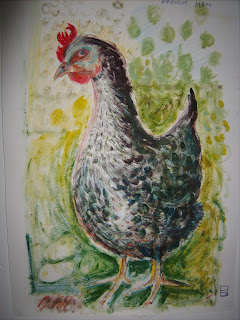