This is my 26th letter to you, this one is about Easter.

Easter : Chocolate rabbits, fluffy chicks and Easter eggs, maybe some new clothes, a 'run' in the car and some gardening. Oh and telly of course.

Easter used to mean something a bit more offensive, it was about the celebration of a death and resurrection. The festival is no longer celebrated by the majority of people in this country, but it is celebrated sometimes in gruesome ways in other parts of Europe and the Latin world. Are we missing something? In the aforementioned places the celebration is of Christ.

We have forgotten Christ Jesus, or he has become an embarrassment to our politically correct society which believes everything and nothing. Having said that, science is the new god, and 'evidence' is its new mantra.

So why do I bother at all with this Christ? What does this man's death, burial and ressurrection mean now in this evidence obsessed society, where is truth?

Pilate was a man for all generations, dogged by politics and governance, he asked of Christ ... WHAT IS TRUTH ?  It was asked with a sense of bitterness and cynicism. I ask the very same question, perhaps we all do at some point in our lives.

There are many versions of truth which can be argued and debated and fought over. Why does there have to be one truth? I ask this question in all sincerity....but in response to that - deep down in the heart of me - linked to something which is from everlasting to everlasting, is a desire, a yearning for one truth, for rest.

Surely if we could all live with the fact that there are many truths, the world would be a better place - but the 'evidence' would point to the fact that we do not seem capable of accepting it. Living with no truth it seems is impossible.

So why Christ ? For me it is for the simple reason he did not ask his followers to take up swords or lord it over others or oppress (not that you would believe that from history) He laid everything down, allowed the authorities political and religious to take him, he did not resist - and in yeilding himself - he gave us a gift.

I hate the word religion, I think he did too, I hate what it has come to represent, I recoil from it, but I cannot recoil from Christ. 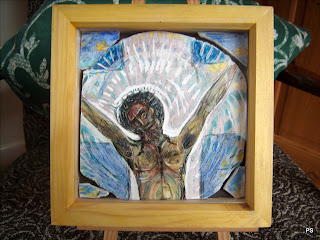 I suppose eventually time will put most of us on the dusty shelf of insignificance....so learning to deal with my insignificance to the world now, saves me later. Our significance is not related to our achievements or how 'good' we are, but to our soul - our real being hidden from the world but not from God who (although misrepresented by me) is love.

You see Monty this is how to be unpopular in one quick blog.