Communing with angels, enjoying ferns and walking the dog. 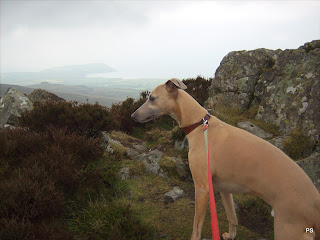 'The lord gives and the Lord takes away, blessed be the name of the Lord.'

16/5/12 Speaking about the sacking of the Liverpool FC manager, a reporter said that in today's world 'success is more important than sentiment'.

Sentiment is frowned upon as something weak and wet, it holds no weight - it is just about 'feelings' - as though feelings are only for the feeble minded - yet we all have them do we not?
This makes me so angry!

Sentiment is belief, faith, trust, confidence - dependence on, a reliance. How has it got turned into something not worth giving notice to? We only listen to success now. This is why some of us (including myself) look for it everywhere. Facebook users admit to exaggerating their profiles in order to have an air of success.
Once achieved, we have to keep ourselves successful with all of the effort that entails. Now I am not saying that success is evil or wrong - but when it pushes belief or sentiment into the dark as being somehow unworthy, I think we loose something of great value in society.

It seems that with failure comes abandonment and embarrassment - we become ashamed of failure but it is the key to success.
Belief was not enough for those who wanted instant results for Liverpool F.C.
The belief of or in others despite their performance is what I am rambling on about, grace is the old fashioned word for it. Belief and acceptance by fellow imperfect people goes a long way to creating a kind of success that is beyond fame or fortune. It is a treasure or pearl worth selling everything for and buying the field where it is hidden.

18/5/12  Back in the little cottage in Newport Pembs. It is like breathing deeply - surrounded by trees - short walk to the baker the butcher but no candlestick maker, and on to the salty sea and sky.

I saw you plant ferns and water lilies. Some things are worth waiting for. Rain pours down the gully on the other side of the lane. Tomorrow - hill walk after breakfast.

19/5/12  Toff and I communed with angels on Carn Ingli. Halos of cloud over the dark moody hills. Acid green and pink tinged carpet of windberry interspersed with dark heather.
Ferns cling on low to the short turf cropped by this years lambs. Ferns really do grow anywhere.
The buzzard circled the top of the hill.
I saw my first cuckoo - heard it call loud to the left of me - it flew out of the trees to eventually fade into the distance, calling all the while, long tail and low to the ground - beautiful sound. 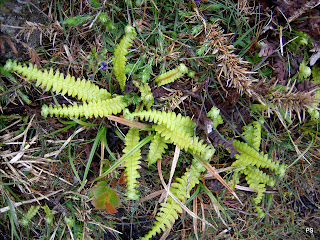 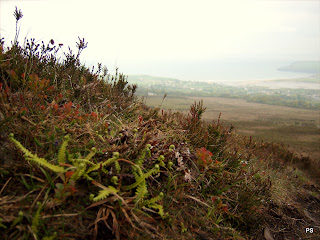 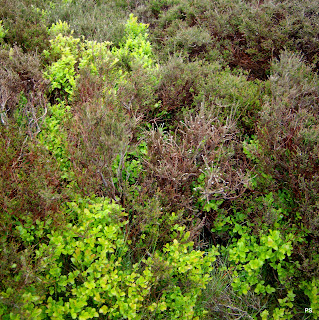 Have a happy day Monty.