Dark clouds, a ship and weeds.

I had thought the dark clouds that have been with me all week were following me to Aberavon, but we walked Aberavon seafront in sunshine, the sea breeze blowing the clouds from my mind. We let our whippet Toff run on the sand at the breakwater end of the bay, and like my past catching up with me I watched a ship slide into the channel along the riverbed. 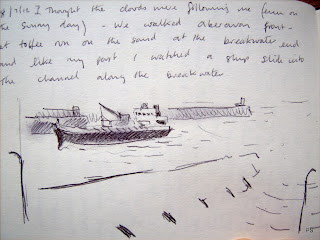 Back in the garden the sun continues to shine, and with renewed hope I see cloisters and coal measure fossils - I see possibilities. I recognise a movement in gardening away from rigid formality. I loved the roof garden shown on GW, and the small enclosed garden in the West End with the beautiful structural 'weeds'.

I have noticed today a plantain that has grown to its full potential in amongst the marjoram, its leaves as big and beautiful as a hosta but with fewer slug holes - mmmm...now there's a thought ! 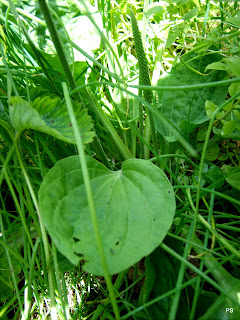 I do like some formality in a garden however, and sad though it is I have had pleasure in re-cutting the turf from around the square paving slabs set into the 'lawn' in the middle of the garden running down to the chicken house. It is to me a bit like topiary - it performs the same function providing strong lines, edges, structure. 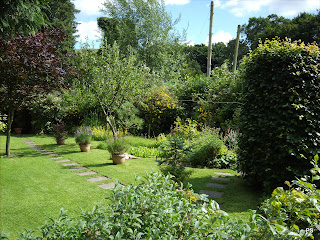 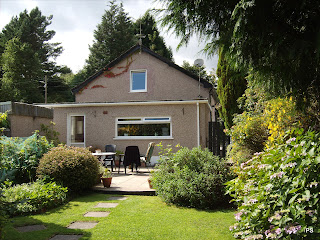 Gardens have always been a place for calming down and grounding the emotions. I discovered this morning a passage in the Bible from the book of Esther where a garden played an important part in events which had great significance for the Jews at that time... King Xerxes in his palace in Susa went into a rage over the deceit of one of his courtiers Haman. He was so full of rage that he had to walk out into the palace garden to be able to think clearly about the awful situation he had been put in.... and thereby averted a terrible persecution of the Jewish people in his Kingdom.

Gardens help us put life and its storms and upsets into perspective, God walked in a garden, his son was buried in a garden, and if you have the faith to believe it, broke free of the garden tomb. Gardens are important, and those of us fortunate to have one whether small or great can find something in a garden that sometimes cannot be found anywhere else, not even from the priest or the singing of hymns. 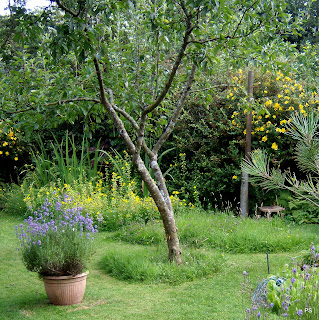 Watching you move through your garden with a wheelbarrow was strangely satisfying.