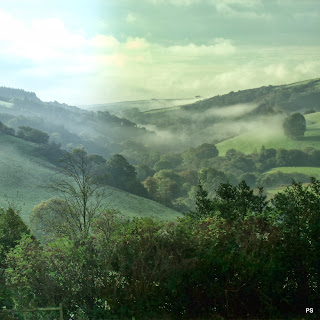 Retaining a vital connection takes effort. We visited longstanding friends in their noble thatched cob farmhouse. We walked and talked in the rain walking the garden and the lanes surrounding the farm. The building is ancient, and takes up a lot of time, effort and money to gradually restore it as they can afford, but it has a kind of integrity in its crumbling cob walls. It has stood the test of time and hardship. 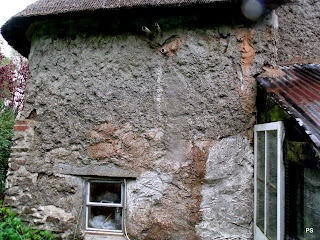 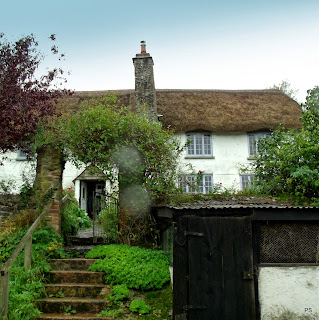 I am impressed with Richard and Ruth, they have an attitude of humility which is rare to find, certainly in me. Ruth has plans for her garden which include a sculpture wall, she has already painted the stepped wall at the highest boundary point above the cottage in readiness to attach driftwood, old farm machine parts and pots. Both Richard and Ruth are artists who like me had to drop out of the art scene in order to survive, because our work was not in the 'loop' which at that time consisted of performance art, installations etc, indeed we were described by a fellow art student as 'Sunday Painters'.

14/10/13  We walked from Porlock Weir along the South West Coastal  Path for a short 4 mile stroll with Toff. There were shingle banks, and one small garden in the style of  Derek Jarman in the shingle at the back of the house. The Bristol Channel sea was rough. 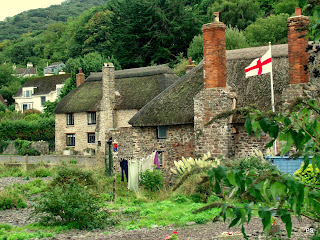 I lost my temper on the coastal path
Beneath the sweet chestnuts.
A sunlit ship out in the channel could not rescue me
From foolish thoughts
Of inferiority. 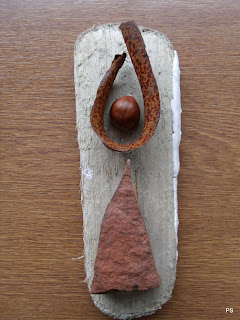 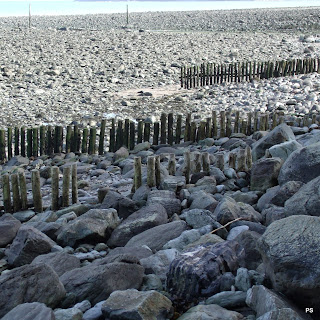 15/10/13  I cannot go back. My eyes look for a way, a path somewhere that leads the eye out of the landscape, a line, a journey. I have to take the next steps like a child without his parent holding his hand. I know thus far God has helped me, but now I have work to do.

Today if you hear his voice, harden not your hearts.

A sunny day, we try to recapture the past with the National Trust. The old and the new contrasted in Dunster.
The almost organic sound of the steam engine hissing and chugging in the distance in contrast to the unholy roar of the internal combustion engine on the A39.
The preserved, dead interior of Dunster Castle in contrast to the living and lively gardens. Particularly alive was the 'Dream Garden' the walled garden at the foot of the hill with its dahlia's : white, cream, pink, yellow and crimson.
Dahlia's dreaming. 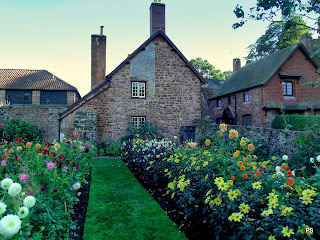 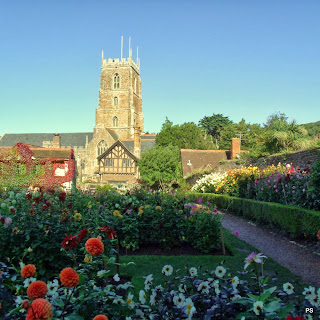 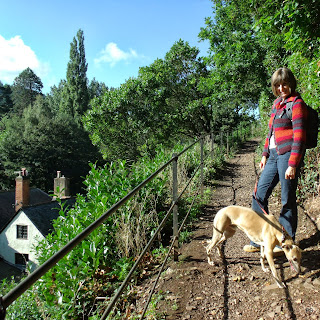 16/10/13  Middle of the week. The new covenant is not about having our hands held, but about being guided from within. Dusty artifacts being replaced by a vital spark. As I muse on this difference I see that the word is true when it says that once enlightened about the difference it is impossible if you then fall away - to return, because you crucify Christ over again and expose him to public ridicule. I have to fan the embers of a dying love back into flame, passion is the most important thing.

Orange moor tops and howling wind through ancient bridleways.
The reed beds sound like snakes hissing in the grass.
'Wild today' a fellow dog walker said - holding on to her hat.
In the Tearoom a couple instead of talking, communicated via their mobiles to unknown others.
Later in 21st century Dulverton, two young schoolboys fresh from their bus discuss the lesbians in their class. 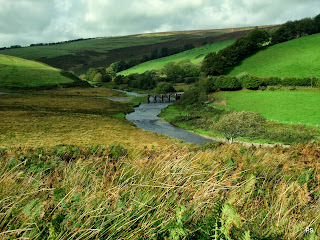 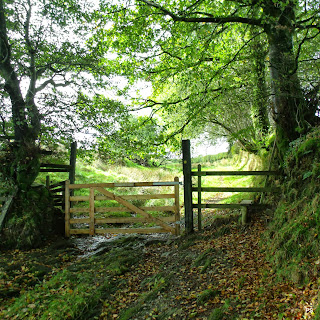 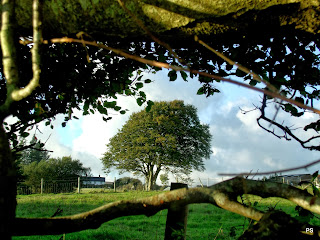 The dog trembles under the duvet twitching in his heavy sleep.
A dry and cloudy day on the edge of Exmoor.
Last day of the dog's holiday.

We walked from Dunster Bay to Minehead, with its empty seafront and closed cafes and gated Butlins.
The sands along Dunster Bay were beautiful - civilised by the line of beach huts along its landward side.
I feel sad that companionship has replaced passion, but still beyond all this is the heavenly home. 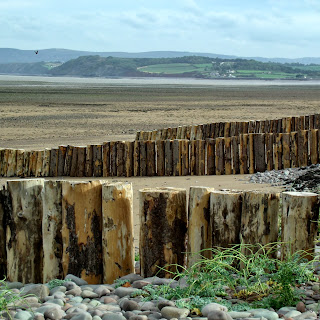 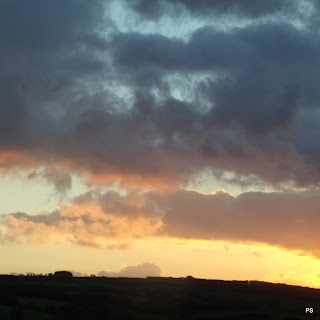 I still want to make decent paintings that say something about this soil we tread, the air we breathe and the light we see. The moor has an ancient unchanged feel about it despite our digitalised lives. The rhythm is faster because of the car - but even this is slowed by narrow roads that duck and dive and twist suddenly. Horse and rider still canter along the lanes as staggs bellow and clouds zip overhead. 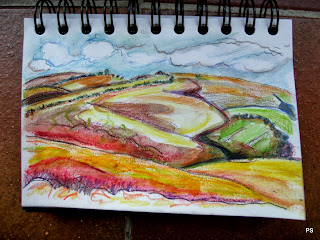 When I read the comment by my walking friend, garden maker and photographer Charles Hawes, I realised that sometimes when I write from the ramblings of my thoughts, it may be pure drivel ! I listened to a very interesting discussion on Radio3 last night about blogging and literature, and I agree that blogging can be about provocation and wanting to get noticed, it can also be a place where sparks can be ignited .

I do not want to be offensive in any way, and the observation of the young schoolboys discussing lesbians, was not to suggest they shouldn't, but that when I was their age I didn't know what a lesbian was. The 21st Century has meant that access to knowledge has exploded, and alongside this there is an inevitable loss of innocence. Now I hesitate to know whether innocence is the right word, perhaps the enlightened world would now say that it is not a loss of innocence, but a loss of ignorance - and that (it would suggest) is a good thing. With knowledge comes responsibility, and I for one am not sure that we are equipped to handle it all. It is almost a reflection of the story of Adam and Eve and paradise lost.


I would also like to add that I know that it is possible to return, but not through the strict application of law, or even through wilful ignorance but through forgiveness.