Sitting, clothed and in his right mind,

I have been reading a Christmas gift during a period of enforced rest due to a small operation : 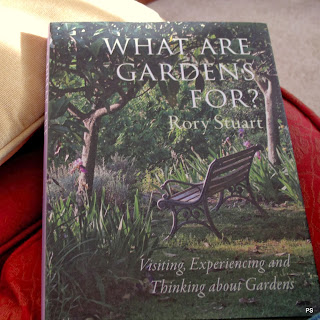 And it has made me think.

Rory Stuart introduces us to the question posed on the jacket of his book in his first chapter, where he focuses on the health giving and spiritual aspects of gardens, one of the passages which struck a chord with me was this :

' Children are often particularly sensitive to what we might clumsily call the spiritual emanations of nature, perhaps because they are uninstructed in science. '

This reliance on scientific analysis of every aspect of life has grown in intensity since the 'enlightenment'. As I have said before, we have all benefited in our physical lives from the advances made, and I'm not saying we should go back to ignorance. Stuart though poses a question which highlights our disconnect from our spiritual selves, only to swiftly move on in succeeding chapters to an almost scientific analysis/critique of gardens. Is this because we are afraid of what we do not see clearly or are unable to quantify ?

I think I may be a romantic, or perhaps a madman. I preferred what Stuart describes as the 'gushing prose' description of an Italian garden called La Pietra than any cold analytical breakdown, here is the gushing quote :

'Box and cypress perfume the air, convent bells, birdsong and the croak of frogs in the lily pond fill the garden rooms with quiet music, soft turf and hard gravel, warm stone and cool moss, shade and sun mark the progression from one heart rending vista to another. '

In my madness, I believe the writing above used as a bad example of garden critique invokes something of the soul of the place. I have not visited myself, but each experience of that garden will be unique to the visitor depending on so many factors also described in the book.

Perhaps it is my fear of criticism that is the problem here.

I did agree with his assessment of www.veddw.com :

'Colour is not, perhaps, of the first importance in this garden, any more than flowers are; shape, space, dramatic layout and history are the things which really matter.'

I too love history, shape and form but all those things are only part of a search for harmony that we undertake in the making of a garden, the contact with the elements and seasons all play their part, even the emotional investment which Stuart seems to dislike. 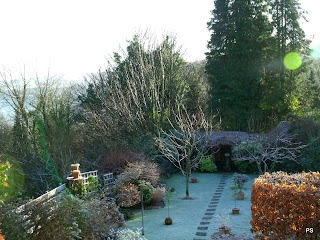 Here in my small small coal tip cloister garden (not cloistered enough yet) the added bonus of birdsong, the sound of the wind in the trees like waves on the shore all add to it. To my deluded mind it has an Italian or at least a Mediterranean flavour, with next doors borrowed trees.

Italy and the Welsh valleys already have an historical connection, and there continue to be local ones.

I am a dreamer, a contemplative person who meditates in a loose way, a person who prays or connects with God, and as such imagination comes into play in how I see the world. This morning I saw the top of the small copse in the public park next door from my bedroom roof light. It is just a glimpse of tree tops but it took my imagination to a field, suddenly the old band room was surrounded by fields rather than houses, ramshackle sheds and splintered trees.

The reality of this place is euphemistically described by estate agents as 'semi rural'. It is post industrial, the industry only ending in the 20th Century my lifetime. It is scruffy, littered, sometimes noisy when the wind blows from the east carrying the sound of the infernal combustion engine from the main road to Brecon, up over the hill. So this is no rural idyll but it is the closest to it that we can afford.
Very little remains of the truly rural this side of the Beacons, but it has its own kind of beauty if you have eyes to see it. The mountain opposite is carved into with the quarries that provided the sandstone for many of the houses here. The quarries now house perigrine falcons. The coal seams are visible as linear horizontal scars on the mountain side with coal waste screes flowing from the now dead drift mine entrances.

This side of the valley still has its former coal tip overplanted with larch which sadly are succumbing to disease and the effects of fire setters. In the gaps however, native tree saplings are emerging along with hosts of wild flowers such as foxglove, hypericum, evening primrose, buddleia, rosebay willowherb and even one of the UK's rarest orchids.

This garden below the coal tip is clothed in what I imagine are Italian clothes, perhaps the influences are subliminal, they have entered into my subconscious mind through time, travel and reading. The gardens that I have visited and have influenced me include the terraced gardens below the monastery in Valldemossa in Majorca, the cloister garden in Aberglasney, Plas Brodanw, The Veddw, and Versailles. (at least in my memory, although I have rediscovered slides of the garden taken during my visit in 1982 !)

So sometimes when the wind is blowing from the west and only birdsong can be heard, when the sky is laced blue and white and the air is warm, or in the depths of winter when all is bare bones and the colour is provided by branch and evergreen leaf and the garden has some semblance of symmetry, I sit and am clothed and in my right mind, a mind not focused on the negative but in the summation of all the richness of experience, in the now, the eternal now. 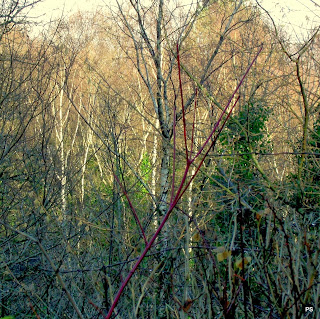