The Art and Craft

This feels like a one way conversation now you are twitterless.

There is something about getting older that brings to the fore a sense of the past, the future remains open to possibilities as yet unknown. I have respect for my roots in the ancient past, but also have an appreciation of the contemporary.

The craft of making has to a large extent left the artists hand and is instead given to others to make - doubtless talented and skilled. This has always happened, masters had their pupils. But there is an integrity to a vision being made visible directly by the artists hand and eye.


I am new to gardens - but it is becoming clearer to me what I like or prefer to see in a garden and it involves a sense of structure, the art and craft of garden making. There are a mix of elements which please my eye in my still immature garden. Old newel posts in oak as finials on my raspberry supports, the uprights of which mimic the verticals of the telephone and electricity poles the other side of the hedge in the lane. An old u-shaped piece of iron painted gold reminds me of this ancient landscape formed by a glacier in the last ice age. The flame-like spur of a rusty piece of car a reminder of the Holy Spirit, and finally an inverted triangle of diamond anthracite as hard as nails, a tribute to those who tunnelled under this land. These elements are placed atop old laths to raise the eye above ground level. I thought myself a bit mad to be honest, but how wonderful then to see the employment of a similar device when visiting Kentchurch Court in Herefordshire.


I had the real privilege of being shown around the gardens and part of the estate and deer park by the head gardener Tristan Gregory.


I found in Tristan a soul with a similar respect for the past and for the art and craft of gardening, although on a grander scale. There is a real sense of the history of the place and the roots which nourish it. It is grounded by its ancient trees and parkland.

On our walk I noted uprights in wood, thick and thin posts in groups leading the eye, this was a visual language I could identify with. Tristan has and continues to do a lot of new planting which also has a lot of maturing to do, so he raises the eye up to a higher level, also by planting in natural pockets in trees. This his stamp on an ancient place respecting what has gone on in the past. The old bones of the garden carry the new planting with it. The water gardens are settling in, and where the canopy and the skirts of the pine wood have been thinned , bluebells emerge from the ground like magic.

Another kind of magic was to be found in the ancient broad girthed trees of oak, sweet chestnut and yew.
The twists and tortured boughs of which were testament to the years of changing climate and passing human history. The holy yew would not let me take a photograph of it, instead it began to text me with what seemed like random letter patterns ! Was it the tree speaking or the damp getting to my phone ?

The end of the walk brought us to the formal gardens. Symmetry pleases my eye as much as the deliberately sculpted landscape and its framing by trees.

I am not a nationalist, but was shown the tree under which Owain Glyndwr sheltered, and was told that this place was Wales once. I now have a small slice of Kentchurch at home in Wales in the form of plants from the garden. Owain would be proud ! 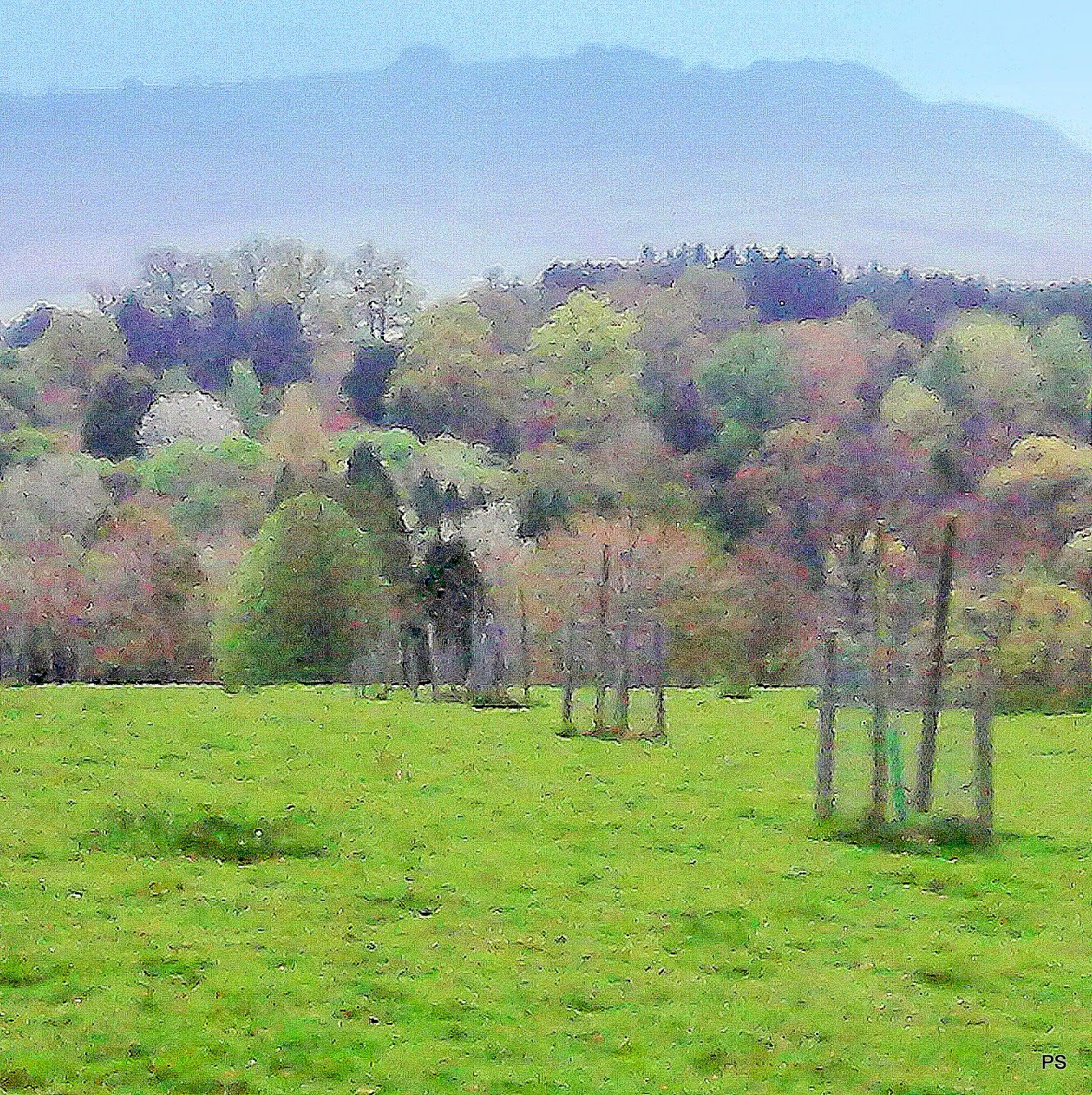