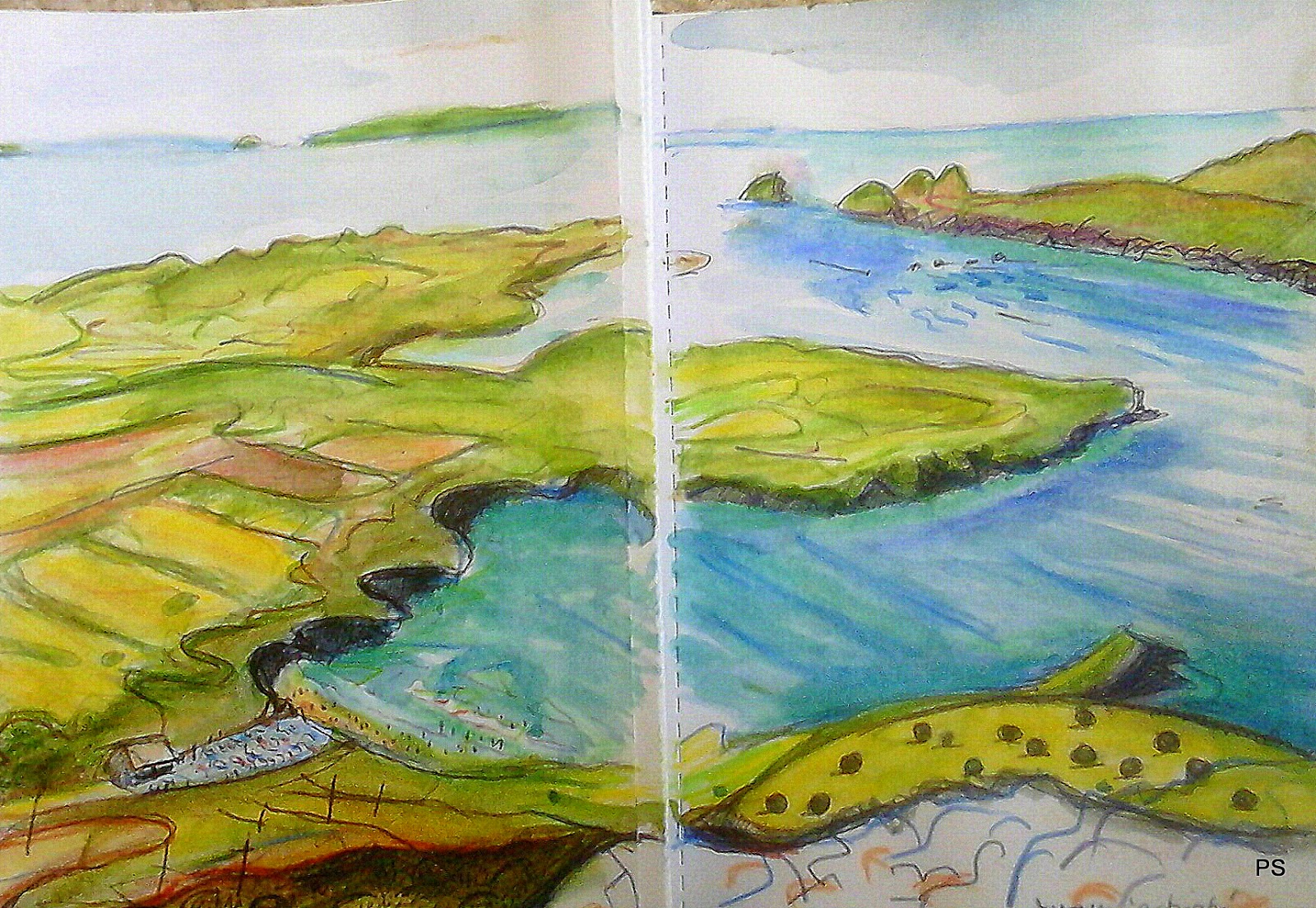 I have been walking the paths between Porthclais and St David's in Pembrokeshire. The paths themselves are like gardens; packed with wildflower communities and buzzing with insects. The coastal path too, although badly eroded in some places- has a varying set of habitats depending on the underlying rock and soil even within short distances.

I have visited this place every year for the last 8 years with my son - it is a time to take stock, to reflect and to listen to one another - the landscape and environment facilitates reflection. This is a supernatural place.

5/7/14  Damp morning, the sky clears from the west with Piet Mondrian clouds. Tent zips unzip and bedraggled women in pj's and micro fleece scurry head down to the showers. An upright Dutchman mounts his bicycle with its old fashioned lamp reassuringly glowing yellow in the early light - not the harsh halogen blue of our digital age. How I yearn for lamps and soft light, for crows calls and peace.

The sun comes out and more campers now happily walk to and fro - "going up to get washed" says one.
We all look about us - judging tent, appearance, clothes - are they 'true' campers, are the tent pegs in the ground properly, is their tent taut ? ! Others are in a non-judgemental world captivated by sky and sea and seagull mews.

It is difficult to leave the 21st Century behind.

We all believe this is freedom - but we are not as free as the gulls. We are duped into thinking we are free - but this kind of state endorsed freedom comes at a price. We pay taxes and bow to incoherent laws which still protect the rich - we are the consumers of peoples, of environments and eco-systems.

STOP ! It is not good to think outside of our bubble when we need it to live as we do. It is too painful to see any other reality.

The natives have been gagged - our wild and free nature boxed. I don't know how to live outside of this luxury. Perhaps 'savages' were living closer to God than ' Christians'? Christs freedom is the freedom of the hunter-gatherer, dependant on God, nature and each other.

How the 'Christian' missionaries got it wrong in trying to change cultures. What a world has been created - tamed and broken by the law.

Here is the awesome writer sadly gone - Bruce Chatwin on the subject of Patagonian natives in his book 'In Patagonia' :

' They became civilized and were good Christians. Life-sized painted plaster effigies of the Indians stood in mahogany showcases. The sculptor had given them ape-like features which contrasted with the glucose serenity of the Madonna from the Mission Chapel on Dawson Island. The saddest exhibit was two copy- book exercises and photos of the bright-looking boys who wrote them.......The Golden Age ended when men stopped hunting, settled in houses and began the daily grind.'

How do we experience freedom then ? We have glimpses every now and then - tastes of it - a whiff on the breeze like honeysuckle scent on a summer eve.
Freedom is found in the spiritual realm outside of the daily grind, outside of the bubble we have created. It harks back to a walk in a 'garden' in the cool of the day. Our freedom is still there in that garden.

We walk the path to the top of Carn Llidi. Looking below us - in Whitesands Bay, people look like ants swarming. We saw pyramidal orchids in flower along the most popular and eroded section of this coastal path. We saw mint, thyme, hemp-agrimony, birds- foot trefoil... too many species for my limited knowledge to name - a coastal garden path.

On Carn Llidi  we saw bee hawk moth, cinnabar moth, small tortoiseshell butterflies, meadow browns and small skippers. Queen wasps were emerging from a nest in the rocks at the very top of the peak being mated in tumbling balls of male wasps. At the top we sat and were joined for the third year in a row by a herring gull - looking for scraps from our lunch. On the menu this time - welsh cake and apple. Both were gratefully received and swallowed in lumps sliding down the gullet.

The gull ate
We ate

At least he didn't peck out our eyes. 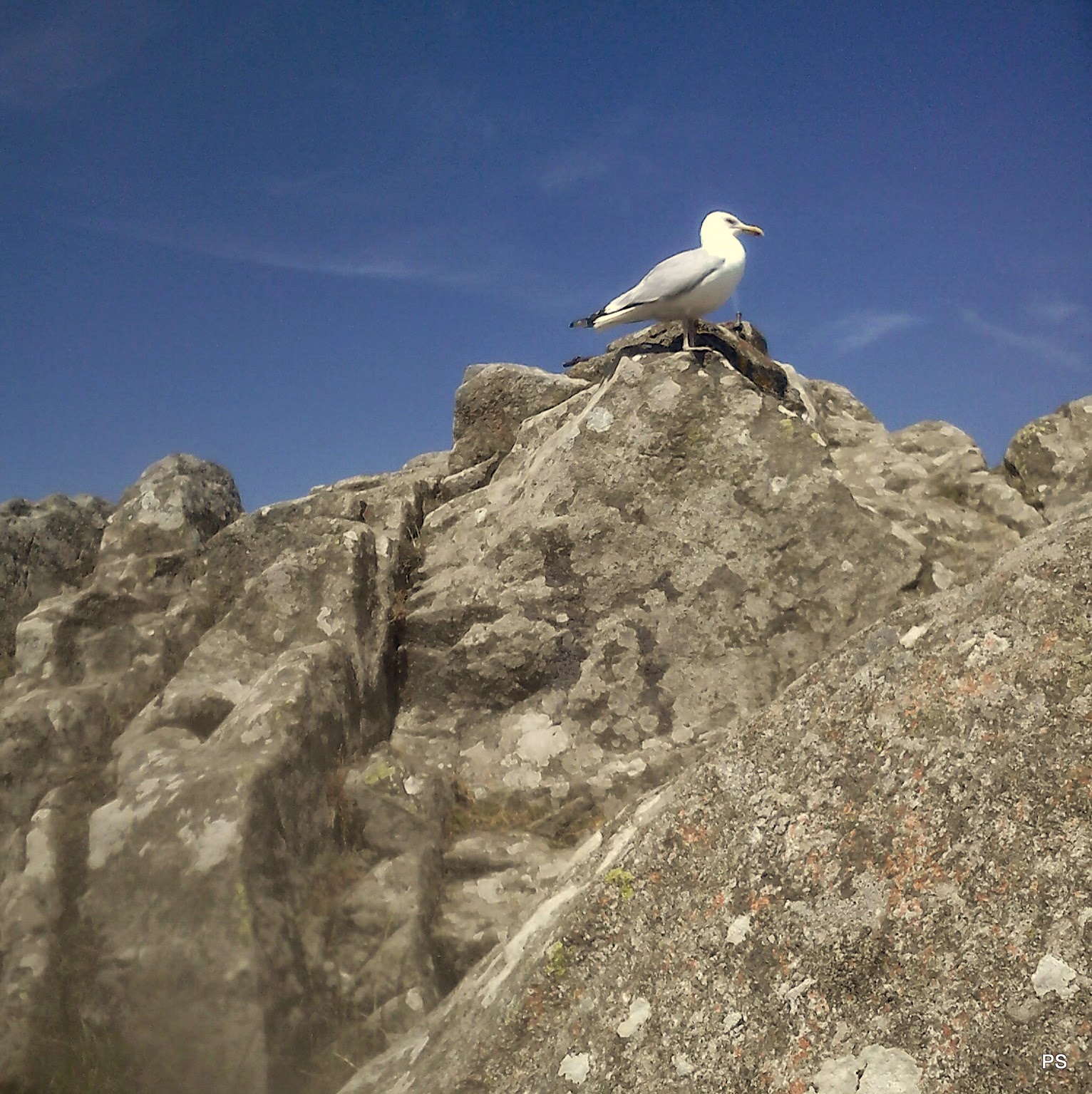 A farmer shoots a gun and crows and jackdaws rise like a noisy cloud of black rags dispersing over the fields.

6/7 /14  Early morning among the stars. The infinite blackness crystal'd - the moon cut in half glowing a pale orange low on the horizon.

How small I am - yet how great I think I am - our minds expanding bigger than the universe. But even I will diminish - perhaps pushed along in a chair or walking with two sticks defiantly raging against the darkness ?!

No - I welcome eternity and its rest, rest from all the judging and being judged, rest from clever minds, rest from my plans and schemes, rest from jealousy, anger, rage, rest from the tortuous machinations of 'love' - which I so little understand.

'Love is patient, love is kind... it does not delight in wrongs'

Before we walk to St. Justinian's -we discuss reality, this physical reality - this diminished world - less insects, less bird-life, more people.We discuss our ability as a species to push science through new dimensions of reality, digital reality being one of them. How often I am engrossed in the digital version of the world, even in this awesome landscape.
This physical place is but whirring atoms with spaces between - not even the rocks are solid. Which reality is truth? Why can we not leave things unexplained - and open our minds to mystery ?
Where is God ? - where is our spiritual self, the me that is me ? Do we connect with this other reality beyond what we perceive as real ? 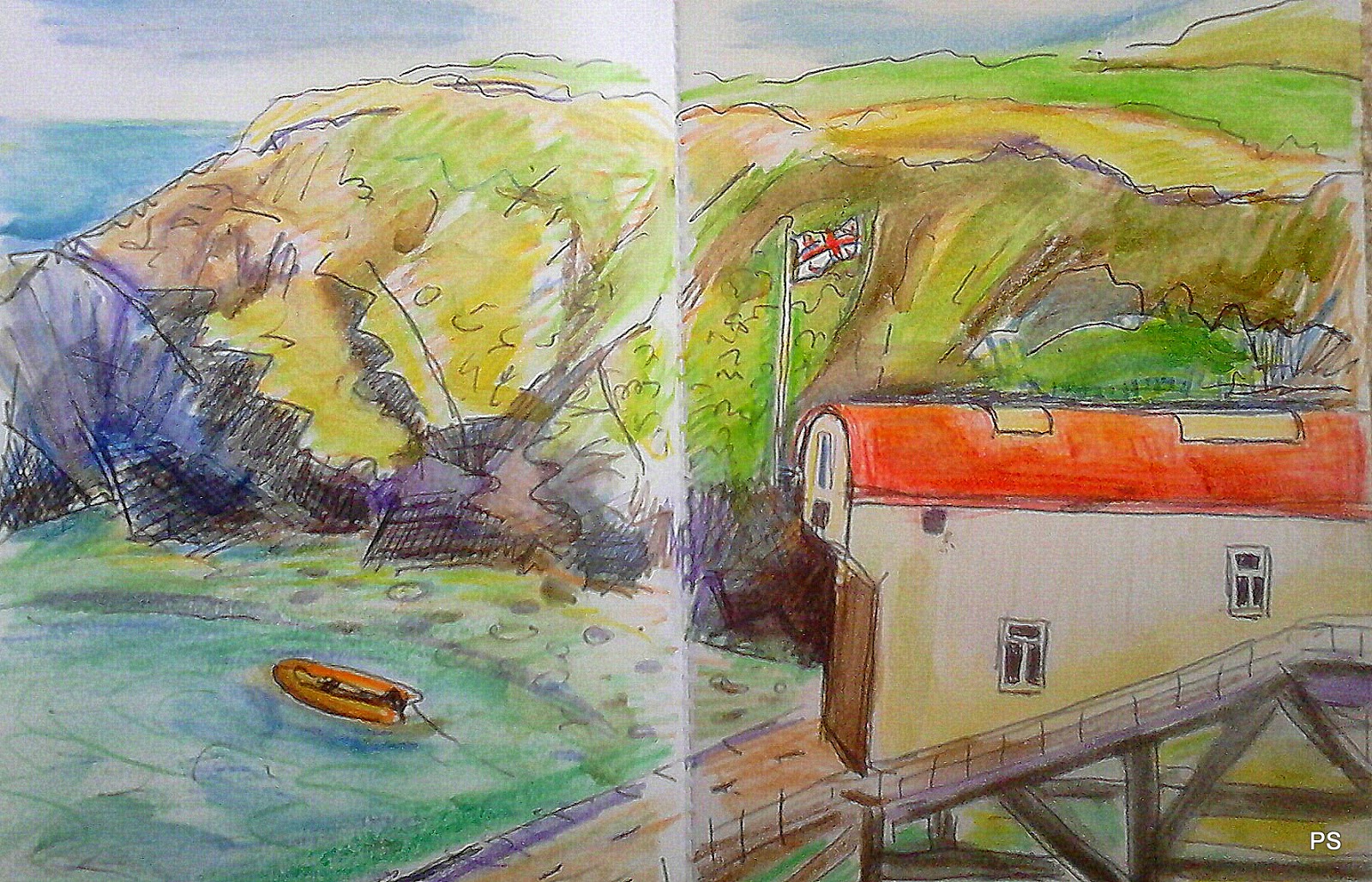 St. Davids has always represented a kind of portal to an ancient world. Some time ago in this place I seemed to hear from within the depths of me the voices of saints - a song of praise joined by the ever present crows and the bells of the cathedral. By saints I mean the people, those who connected to a vision beyond the religious trappings - perhaps they saw God for themselves ? 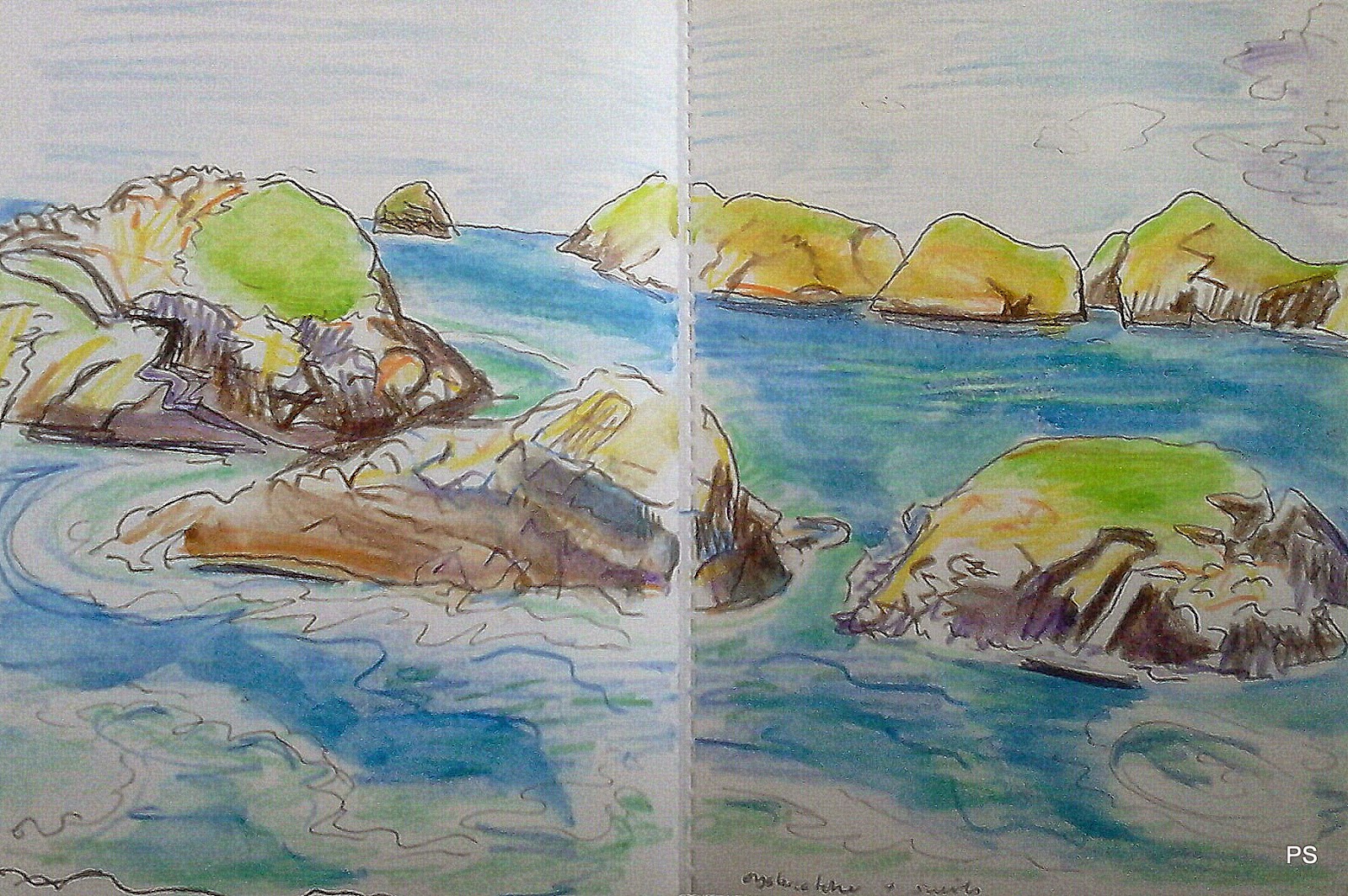 7/7/14  Home again to the daily grind, to the sanctuary on the hill. How quickly self-esteem flounders. The rock slips from the central focus into the periphery. It ebbs and flows like a tide over rocks, crabs and weed, covered under the rolling tide of doubt. I hold fast through remembering how a right way (which is impossible to keep) has been secured in that other reality in another garden. 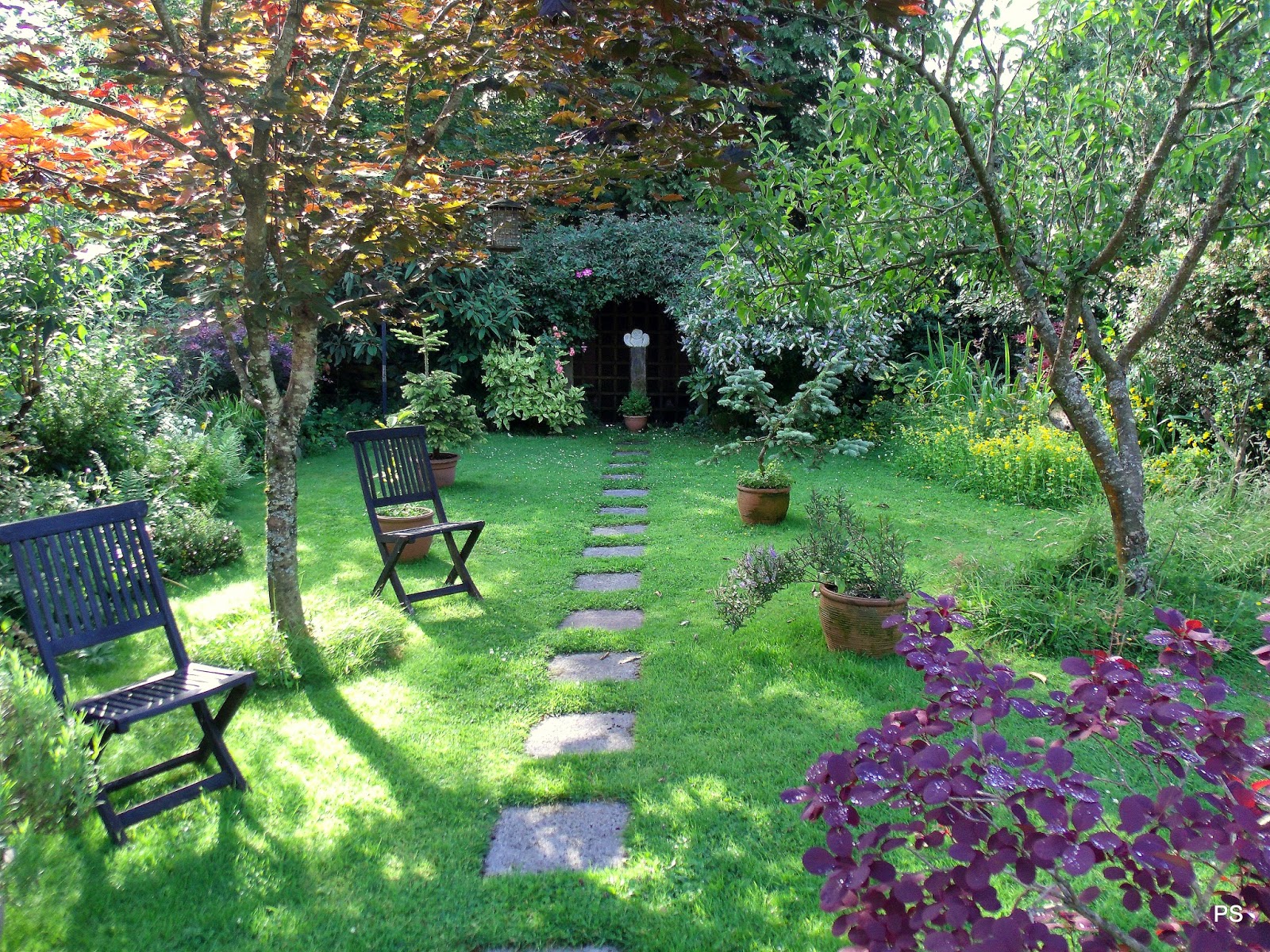