There is much to do to restore the old band hall to somewhere near its original appearance, but at least the new slate roof helps. 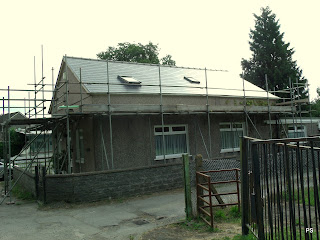 I'm stuck in the past.

Last week we visited Somerset to see friends who were celebrating 30 years of married life. They live on the edge of the Mendip Hills and have a view looking over the levels with Glastonbury Tor in the distance.
I enjoyed the garden party on their steeply sloped garden which was less about the garden and all about the stunningly beautiful view. Both Dave and Beth are professional people at the top of their tree, and therefore their friends were likewise. A deep-seated insecurity started to rise in me and at one point it almost paralysed me. I'm not at the top of my chosen profession, and have always preferred to have feet planted on the ground, but this does not equip you well in the company of the aspirational in terms of like-minded conversation, or so my insecurity told me.

We were welcomed and eased into conversation with company directors, headmasters and lecturers, whose sons and daughters were also headed for academic heights. I eventually dropped my insecurity, but it shocked me just how quickly it came to the surface.

The garden in my humble opinion needed a journey through it, and if it were mine I would brake up the slope with a ziggurat like path with low hedges and planting between them, leading to the upper terrace and that view. 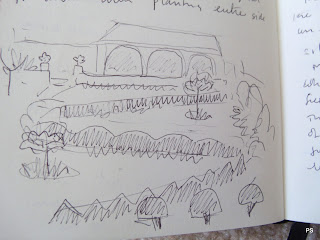 The coal tip cloister garden is making its own music, the radicchio is flowering, beautiful tall spikes of blue flowers. Here is another failed attempt at growing vegetables they never formed hearts - and the leaves were too bitter for my taste, but the flowers are beautiful so I have left them, they create a harmony with the meadow cranesbill. 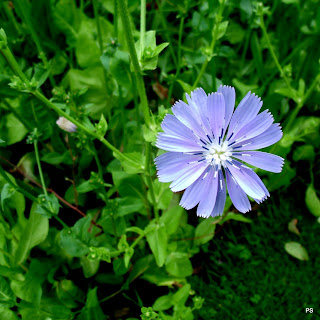 It seems you have a rat problem, so do we. Where there is chicken feed, there be the rats. I have resorted to bait. Trapping and drowning them was not an option. It is distressing picking up the dead bodies, perhaps I am too soft. I now feed the hens small amounts more frequently, rather than filling the feeder in the morning. An obvious solution, but one that was slow to dawn in this brain of mine.

I have enjoyed reading 'The Road To Le Tholonet' I love the fact that gardens can be about more than horticultural know how, they are expressions of place and symbolic of the person who makes them. 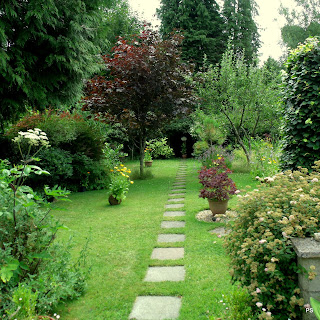 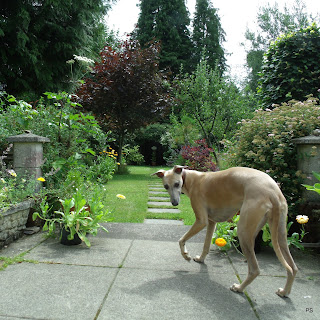