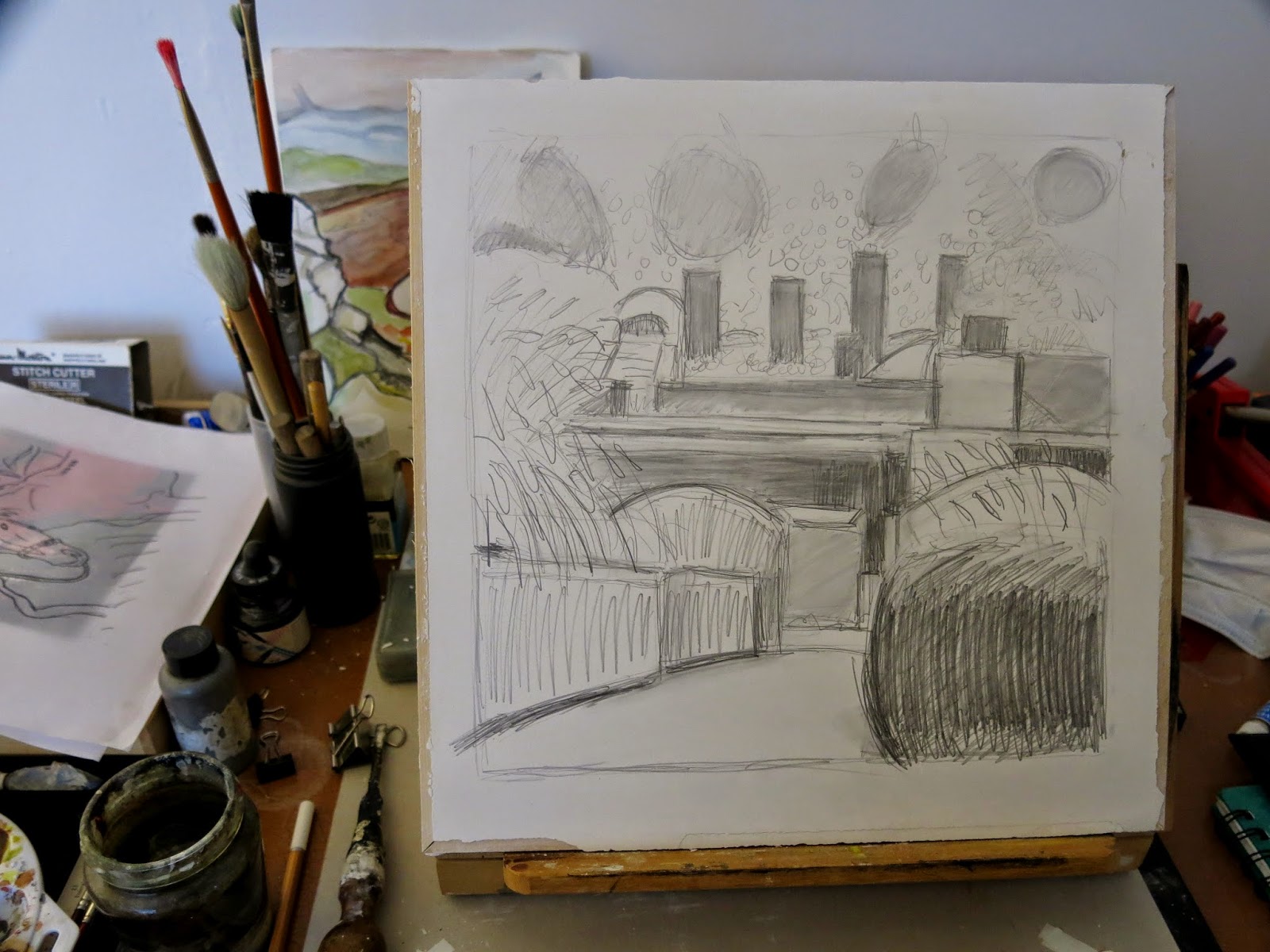 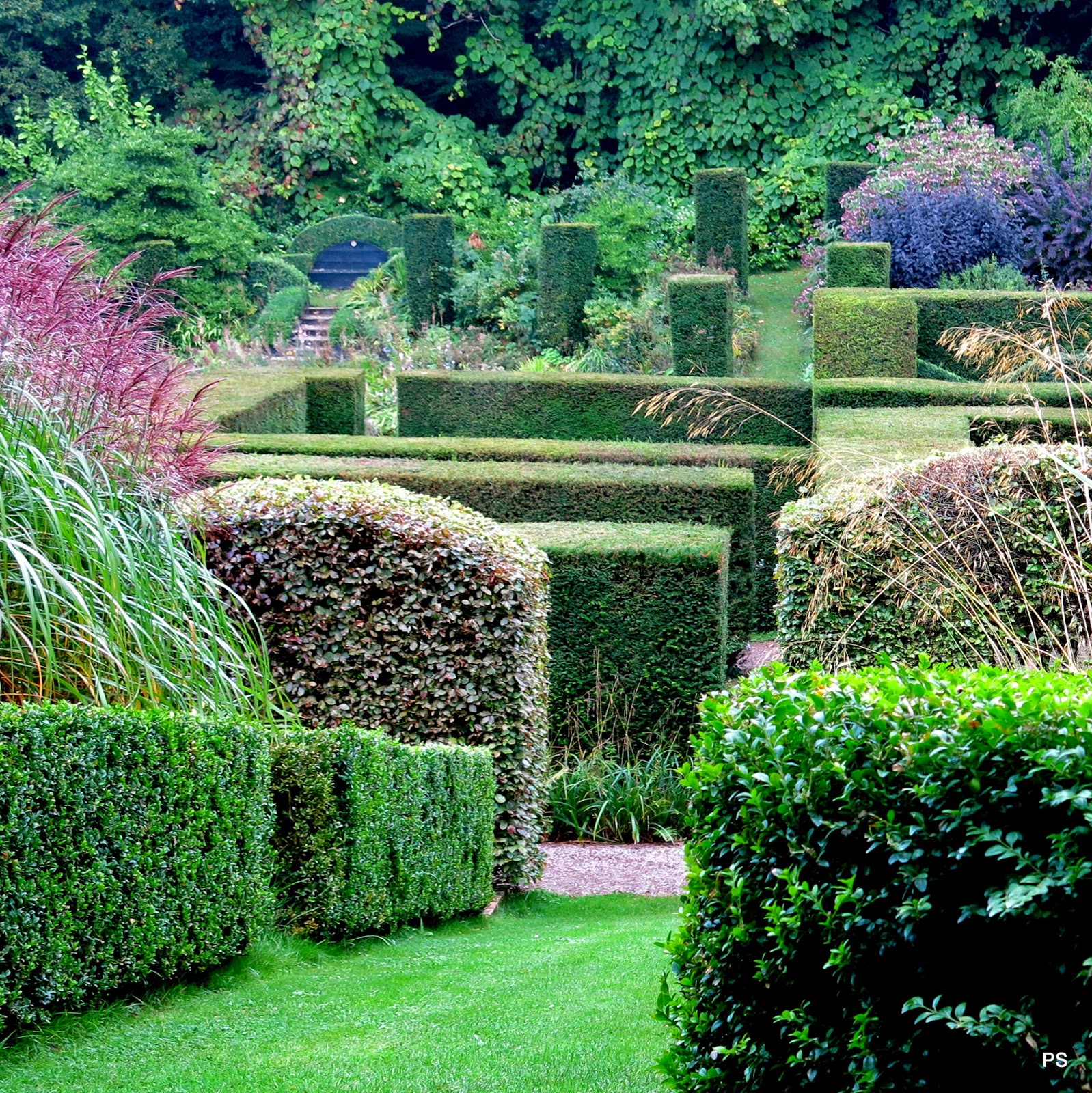 It has been another wet day - but a wet day in the studio with rain hitting the window glass and a piano concert on Radio 3.

I have been making a fresco of The Veddw. The photograph was taken late last summer when I had the privilege of meeting up with some friendly and knowledgeable people at the Home of Anne Wareham and Charles Hawes. The event was a precursor to a lovely www.thinkingardens.co.uk supper at Tintern.

The painting is an attempt to capture both the architectural structure of the hedges, the subtle use of colour and how the garden blends into the woodland around its perimeter.

The process of painting a fresco is fraught with danger ! As soon as the pigment hits the plaster it bonds with it. I love the work of Ivon Hitchens, and in the early stages of adding the pigment I liked the loose free look of the paint marks on the surface .... the stress then is do I stop here ? Do I leave it at that ? 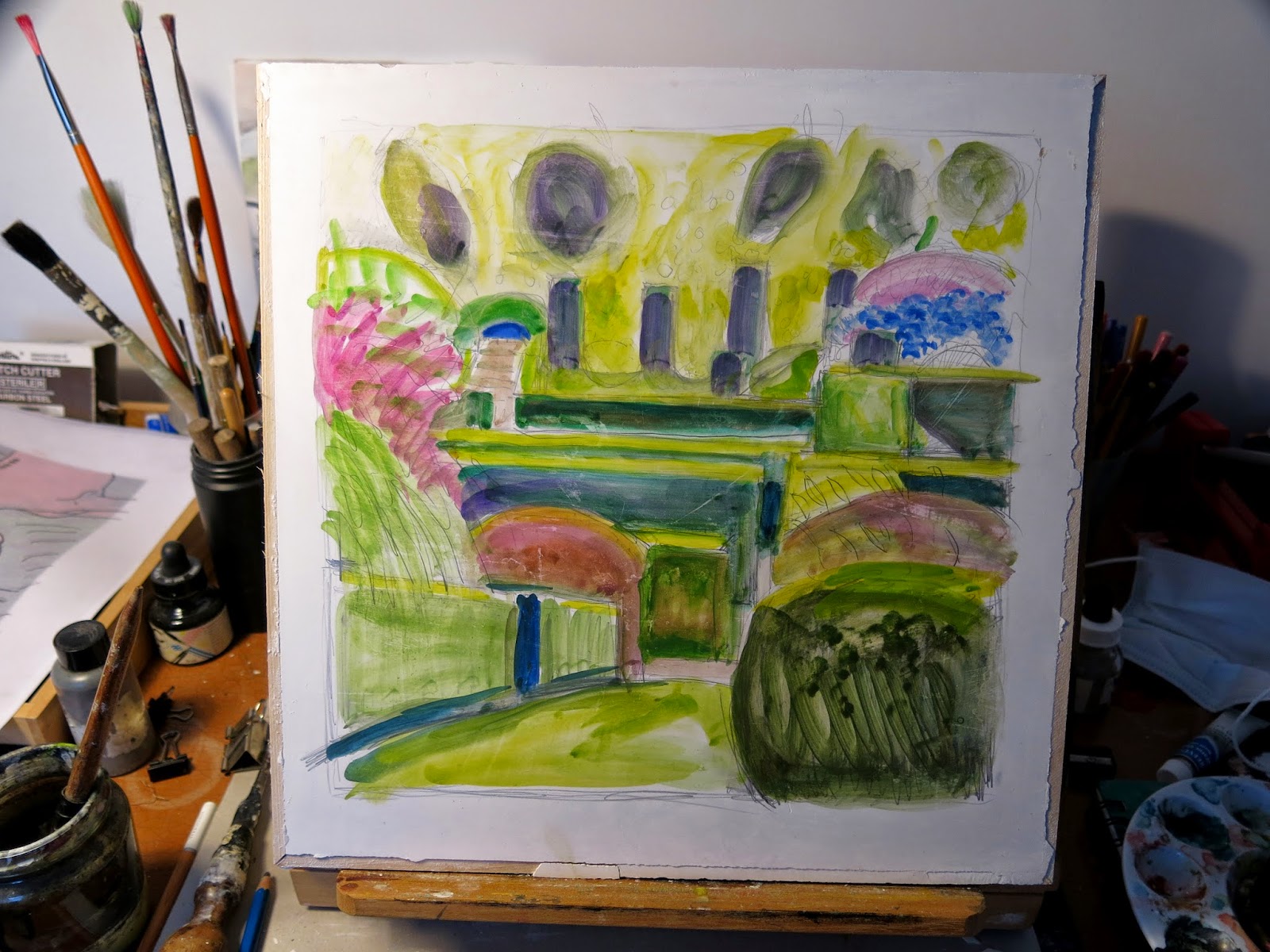 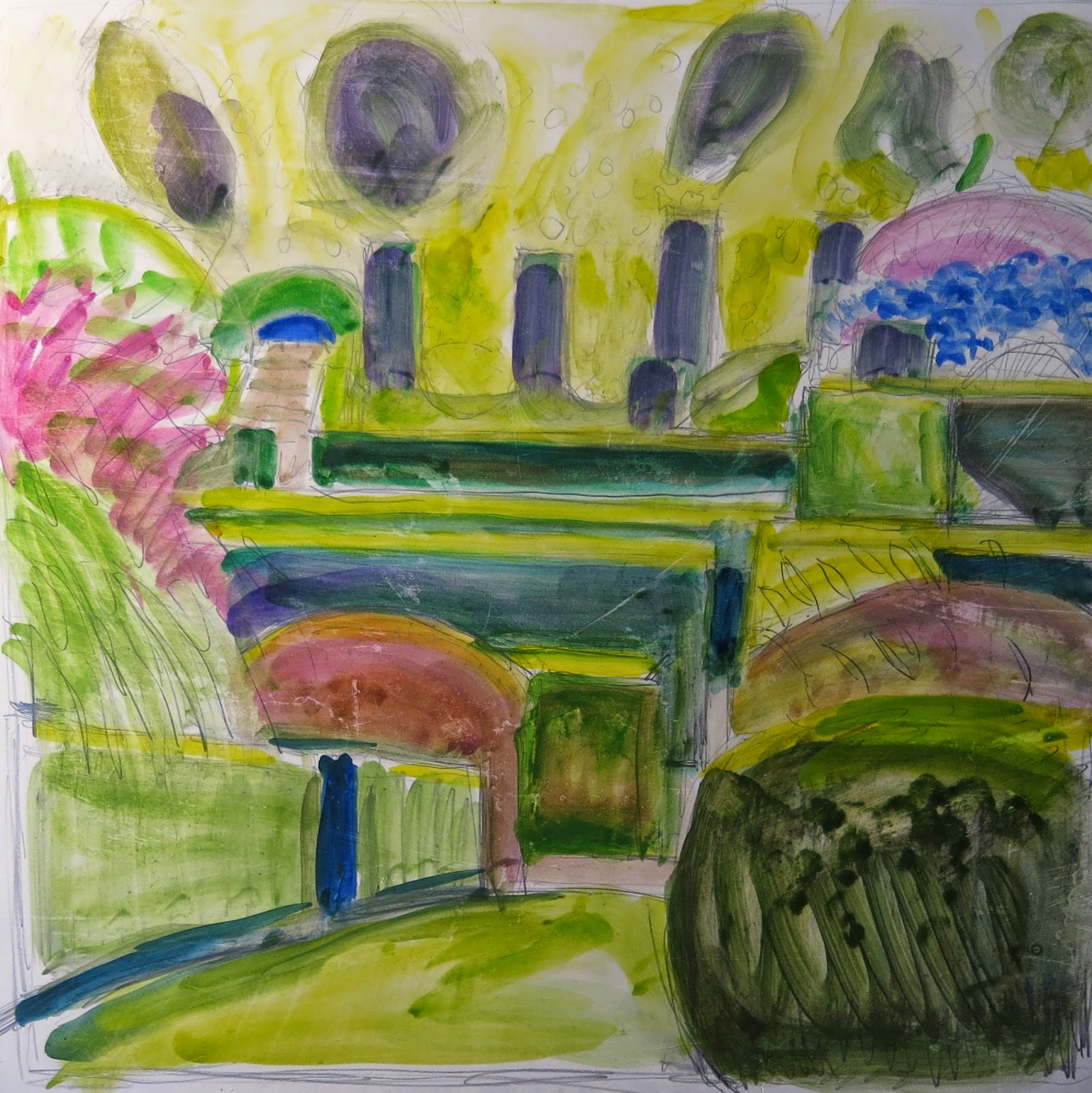 Watercolour can appear thin and insubstantial, neither of which describes Veddw ! So My gut instinct was to go deeper adding light by scratching and depth by using pencil in order to give it depth and substance but without loosing all of the free marks.

The greatest artistic influence in my formative years was the work of Ben Nicholson and the work of the St Ives group. It was almost by accident that I found a means of expression I felt suited both a need to make and paint. I visited Kettles Yard in Cambridge - the home of the Edes art collection, casually but thoughtfully placed in all the nooks and crannies of their cottage home -even the loo. I liked that. I found the work of Alfred Wallis and Winfred Nicholson (underrated compared to her husband) It was this place that confirmed what is I suppose a socialist ideal - that of art being available to anyone. Not that I could pick up any of the works and take them home !

So that confirmed my love of using plaster to draw, paint and etch into - not realising in my ignorance that frescoes had been painted for centuries !

So the next stage of this painting/drawing was more detailed structure. 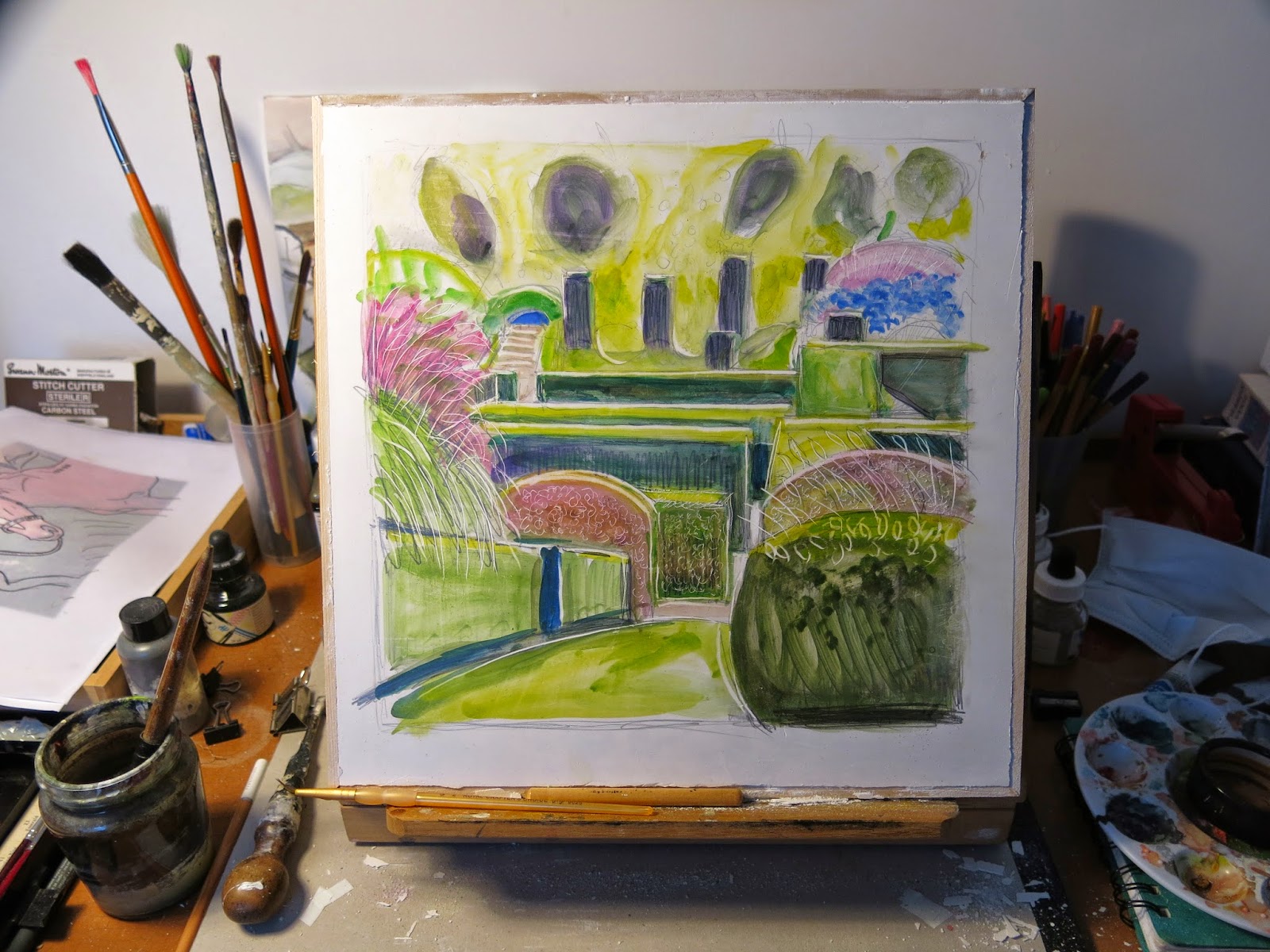 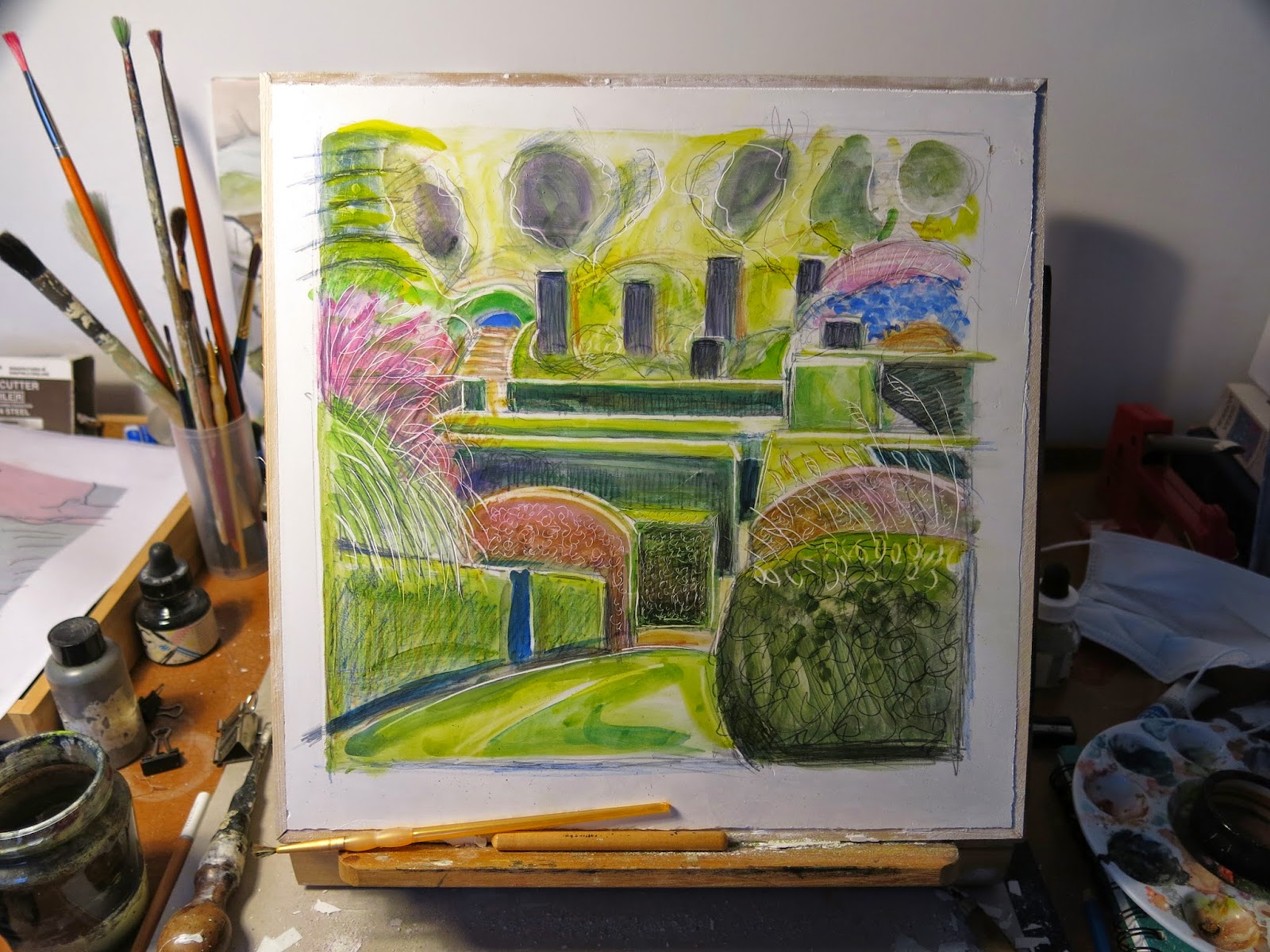 What is clear is that the colours I am using here are not as blue as in the photograph. The photograph was taken in the evening and a large part of the garden at this point was in low light. I decided not to tone the greens down as I liked the structure the yellower greens in contrast to the blue greens provided.This is where a painting becomes a painting - not just a representation.

At this point I became nervous and was afraid of going too detailed - which could kill its painterly feel. I put down the brushes pencil and scribing tool, took the photographs and walked away.

I returned to the painting yesterday and today. I posted a picture of progress on Twitter and Facebook and have had a favourable response ! That always surprises me.

I have decided to just clean up some of the lines a little. 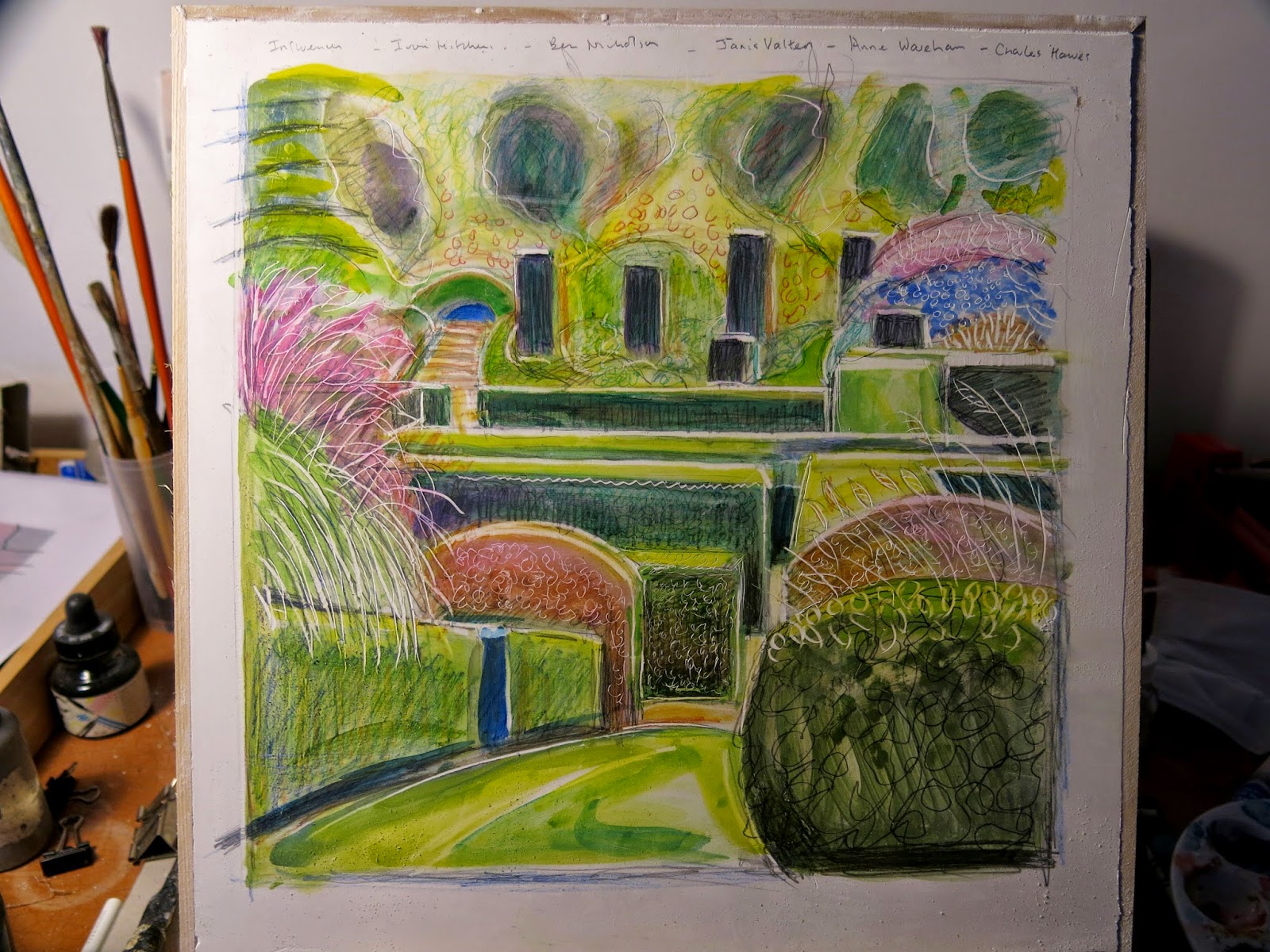 I tried it in its frame 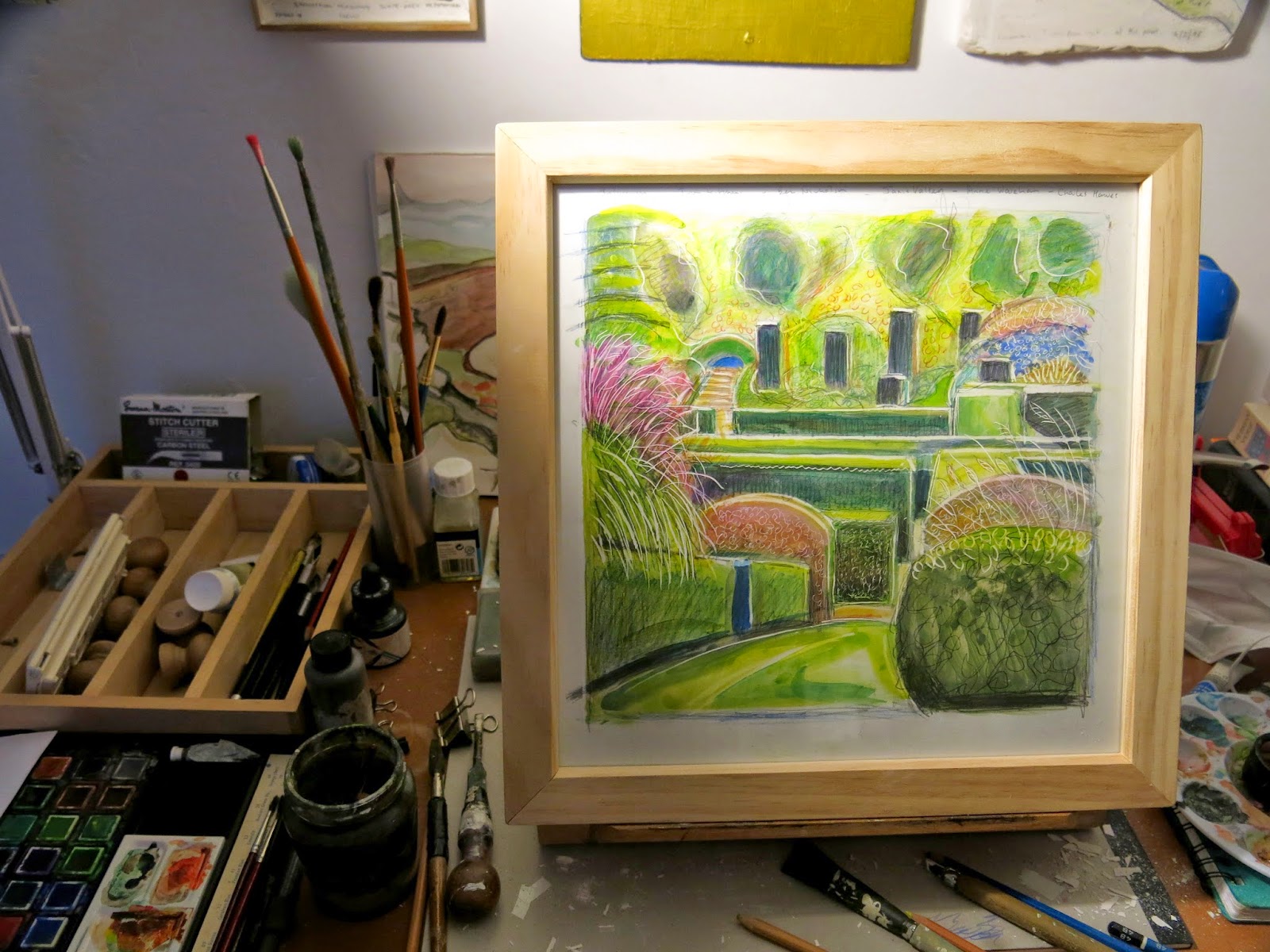 I have also included the names of both the artists work that influenced this painting and of course Anne and Charles as they are the artists in this instance for creating this sculptural garden.

Today I have added a fixative to the surface to harden it, and worked on the background a little more to tie it together - but I must stop now ! It needs to dry off for a while before final framing, but I think it will do. My first fresco of a garden. 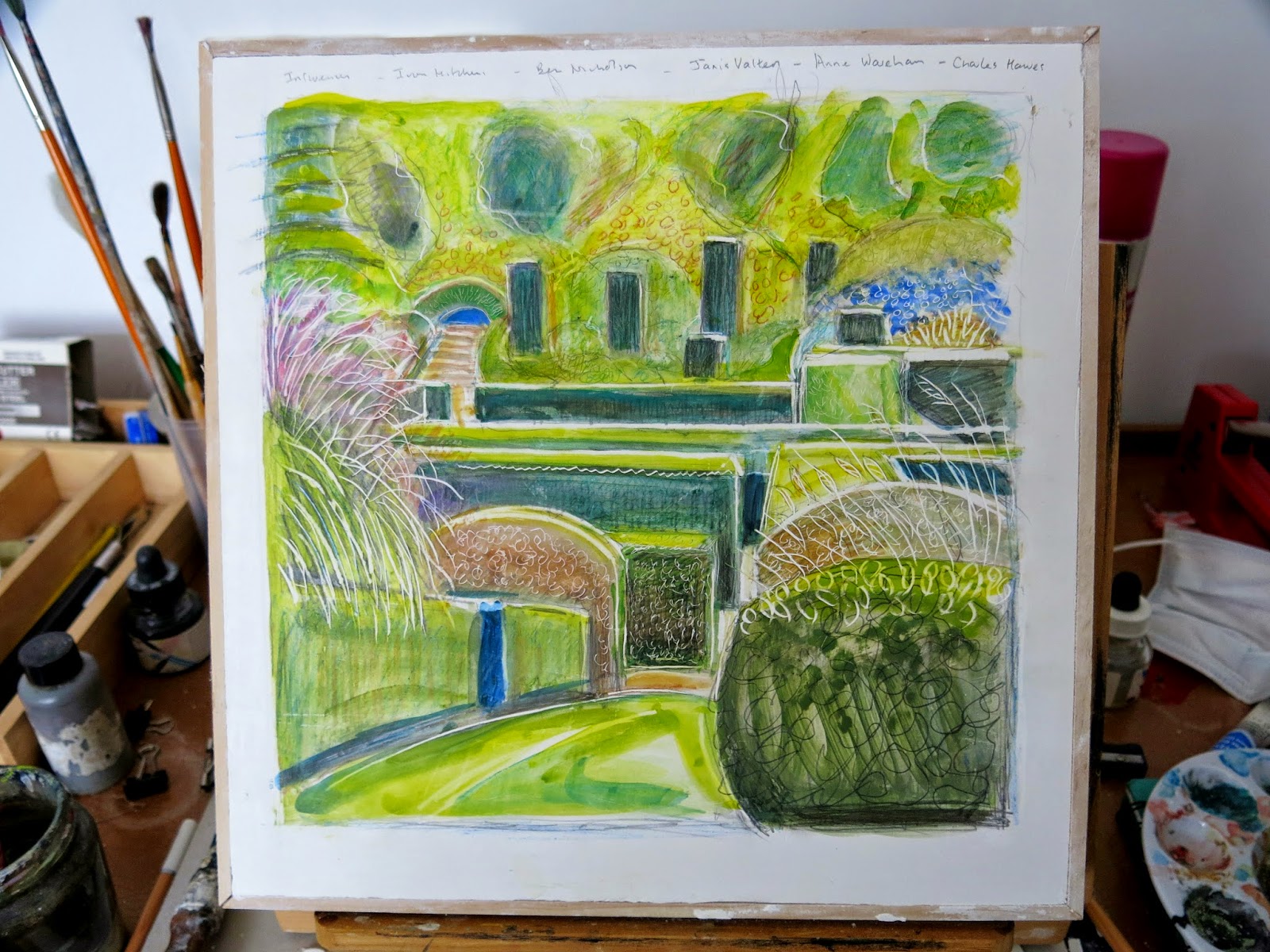 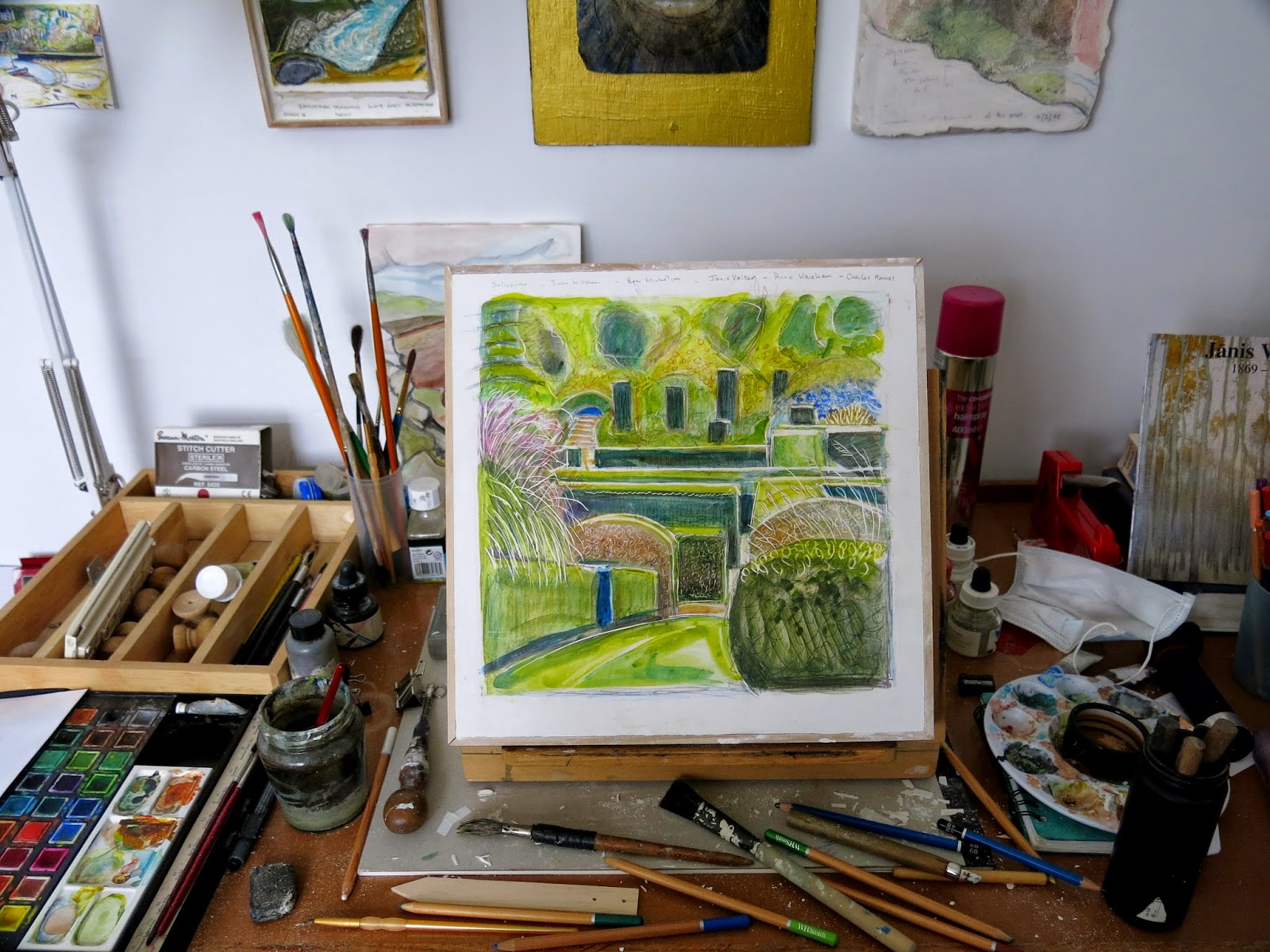