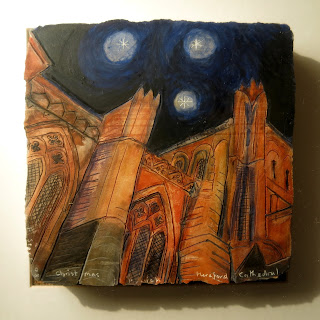 As far as I can tell - there was no celebration of the birth of Christ (Messiah) by the early church. This celebration was created in order to coincide with pagan festivals and has now become a sanitised version of who this Christ was.

He was born into dangerous times of occupation - of political unrest in the Middle East.
A time of expectation, of acts of terror and of dumbing down God.

There were factions that were trying to undermine the rule of Rome and there were the local Temple leaders who were actively suppressing revolt.

This Christ didn't take sides in this man made struggle. Instead he said that we were all at fault, all corrupt, all in need of something new.
There was no difference between the religious and the irreligious - all had missed the point and could not and indeed still cannot solve such issues by political or moral means.

Here we are still trying to solve these issues - still applying the same formula - wielding the sword and standing on what we believe to be the high moral ground.

Swords beget swords and death is the only victor - devouring the religious and the irreligious alike.

I am feeling uncomfortable in my western skin - life built upon ideals which I believed. And yet beneath it all is a thread of corruption and manipulation by the controllers of wealth and power.

Wars are inevitable - we are incapable of existing without judging one another, each philosophy claims the high ground - Christ says - give way.

I deserve nothing - we come into the world with nothing and can take nothing with us. But we have the opportunity to leave a legacy of humility, love, kindness, gentleness and self control. I continue to wrestle with myself in order to leave such a legacy.