Do you ever feel living life is a bit like being on a rolling sea ?
Today is a misty wet dull day of drooping foliage in the garden unlike last Wednesday which was bright warm and dry.

The garden , the weather and my spirit seem inextricably linked somehow.

One thing I am acutely aware of is the riches involved in being a garden 'owner'. I put owner in brackets because we really only inhabit and alter these spaces for such a brief time.

What follows is a diary recording of the sunny day that was 11/7/17. 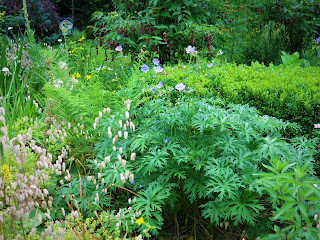 A brief window of blue sky - waiting for the grass to dry.
I see the wren mouse-like creep between the shrubs and it brings a sense of unbridled joy to my turbulent heart. Turbulent with waves of self doubt.

A beetle I have never seen before - a dub nosed rounded beetle with a carapace like velvet - brown and  iridescent alternately as it moves. It appears to be soft and downy - but is as hard backed as any beetle. I try to photograph it with my inadequate phone camera but fail.

The blackbirds sneak to the raspberries hoping I do not see them, but they cannot help pipe one or two muffled staccato alarm calls as they zip off with the stolen goods. What they do not realise is that they are welcome to them this year as my gut is too queasy to eat them, and Sue hates the faff of picking them. 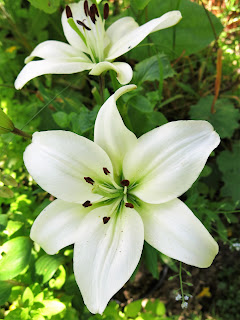 I think that God is a life force, gardens would engulf us if we stopped cutting them and shaping them. There is a powerful purposeful drive within plants to re- generate - for life to continue even if that life does not involve us and our ego.

All at once - a young Jay glides noisily into the willow growing out of next door's garage and a buzzard mews above me. The female blackbird has returned and sits on the wall panting and fluffed out in the heat. She waits for the opportunity to sneak another raspberry.

Despite what my friend Charles Hawes says of my coffee, today it is good. On finishing my coffee I dig and cut out the virused hydrangea which leaves a big hole in the border which is to be filled with a stunted but oriental looking potted pieris (oriental in my fantasy world).
While chomping away at the base of the plant with loppers I was greeted by a pristine comma butterfly - staggeringly beautiful with its olive green iridescent body and orange map speckled wings all ragged at the edges like a child's symmetrical blot painting. I also hear the red kite call which sounds like someone whistling for their dog, I look up into the dazzling sky but cannot see it. Shortly afterwards I see and hear a pair of sparrowhawks fly from the edge of the conifer wood and circle each other seemingly playing games in mid-air.

Here in this cloistered garden - this small intimate space - the vastness of life plays out right in front of my nose, how often I do not even see it, instead I look introspectively and just find a turbulent sea.

This all plays out and I understand my privileged place in it. Humbled by a beetle and the flight of birds. The grasses in the new border move in waves of a calmer sea. 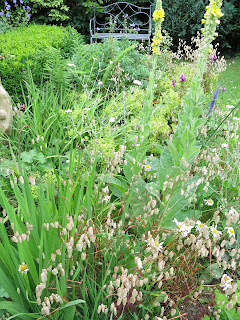 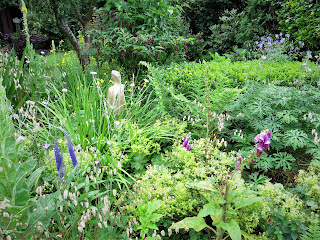 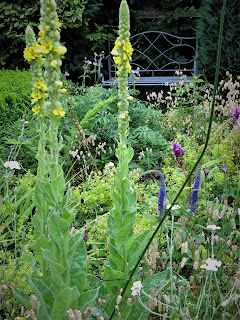 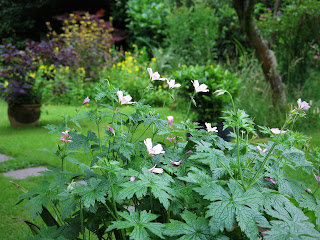 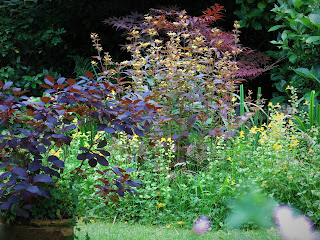